Today was one crazy day for the Miller family.  I had to be up at a good time, I had my regular Wednesday morning meeting today.  Which we expected to go really poorly, or at least awkwardly, given yesterday’s news.  But it ended up going great and running for an hour and a half.  We felt really positive about it by the time that all was said and done.

After the meeting, I was actually in a rush to get showered, get the girls ready, and get out the door to drive up to Hebron to go to the Carrollton Public Library to attend the home school open house that they are having today.  Thank goodness both girls got themselves up, got dressed in what they were supposed to wear, brushed their hair, and were ready to go.  They were very helpful, and excited about the day’s activities.

Liesl had actually gotten up this morning and worked on her Spanish via DuoLingo while I was on my call! 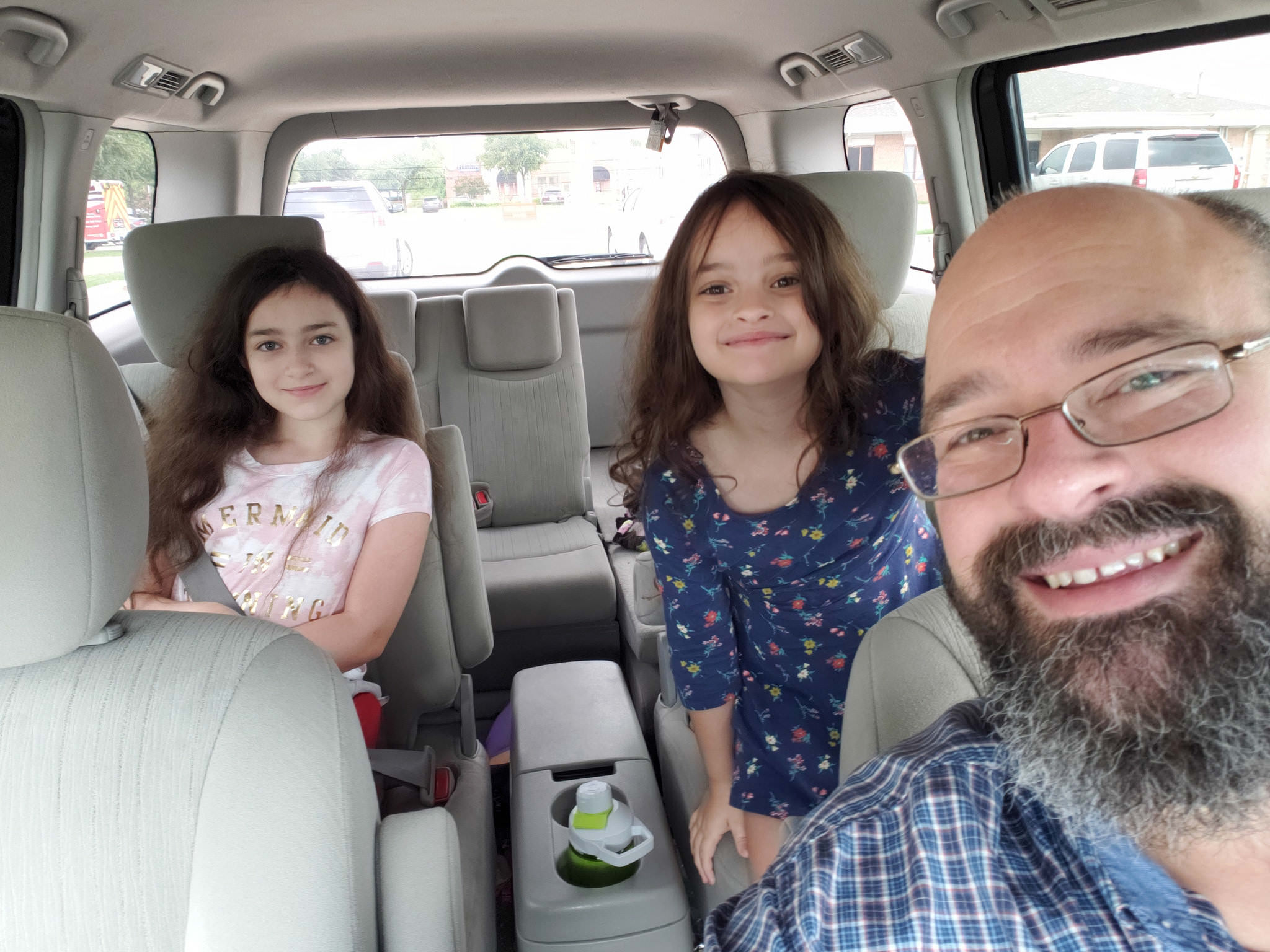 The library was really crowded.  The turn out was one hundred and twenty eight people!  Way more than we had been expecting.

The program had the parents all in one presentation room, while the kids were taken off to do activities to keep them busy and entertained.  We learned about library resources and community activities for the home school kids.

One that I think the girls will really like is 4H.  There is a homeschool 4H for them to check out, and it meets tomorrow.  So that is going to be rough, but we might make it.  The people there seemed really nice.

There is also a local nature trail group that seemed really nice that I think we will want to check out.  They have some neat programs for the kids and activities.  And everything is so close.

Luciana ended up being a little young for the scavenger hunt and something went wrong and she was upset and a librarian had to bring her back to me.  But even Luciana, by the time that we left, said that she had a really good time and just didn’t like the scavenger hunt.  We never found out exactly what went wrong, though.  Liesl tried to explain later.  But I think it was that Luciana didn’t understand all of the rules.

I met Isabella’s mother and we talked for a bit.  The girls want to try to get together later this week to hang out.

While at the library, I renewed my library card which had expired (it was a short six month card, now I have a five year one) and I got a Texture card which gives me access to most libraries in Texas.  So I am well set up on library cards now. 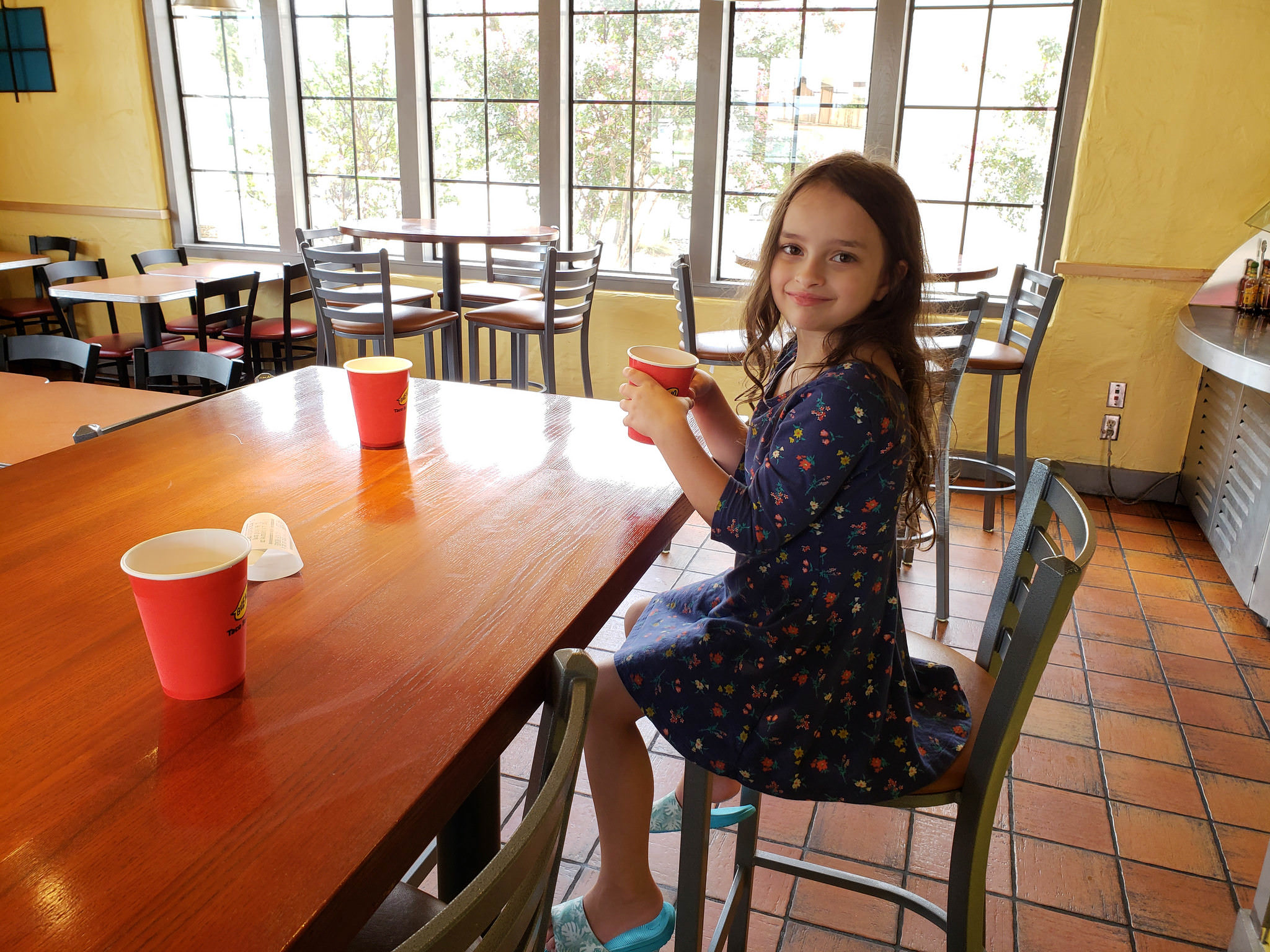 We got lunch at Taco Bueno on the way home.  Luciana especially loves the food there.  She got a quesadilla and discovered that she really likes dipping it into sour cream.  Liesl started with just some Mexican rice, but then wanted a quesadilla, too.  The girls were very happy with the day and the food. 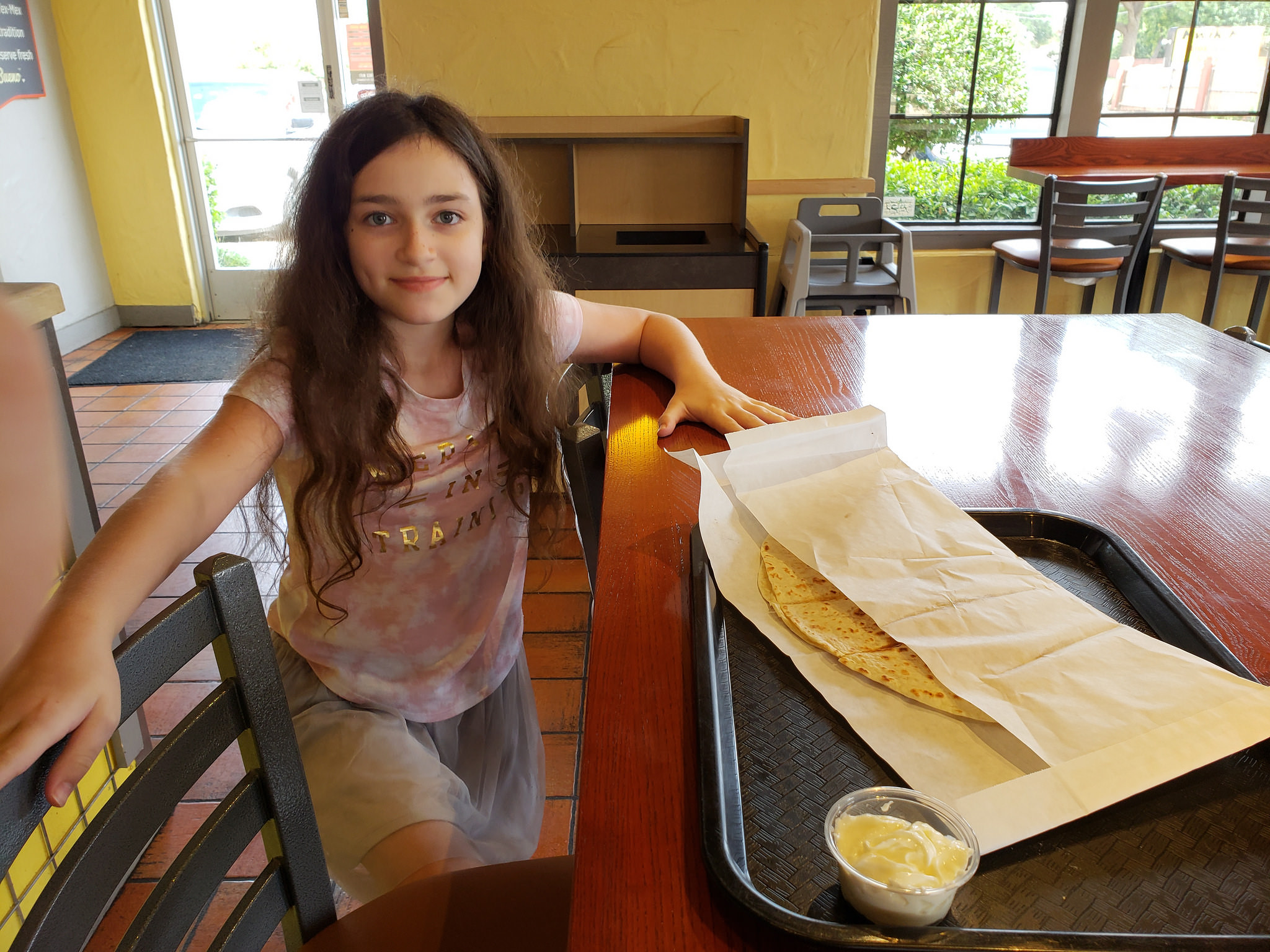 We got home and only had forty five minutes for me to sit at the desk and catch up as quickly as I could, and for the girls to relax a little, use the bathroom, brush their hair again, etc.  Then at a quarter till four we were out the door again to go to the Farmer’s Branch library!

Farmer’s Branch had well over one hundred people, as well, for their dino craft activity event, they had only planned on about sixty.  The room was super crowded and they were scrambling to get stuff for all of the kids.

The girls did three crafts.  The first one was a paper cut out dinosaur that the girls coloured, cut, and glued.  They ran out of parts, though, so the dinosaurs were without feet. 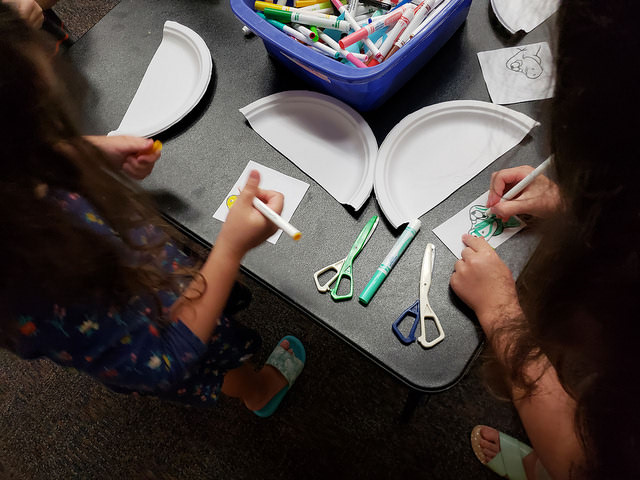 The second craft was making dinosaur skeletons out of pipe cleaners, straws, and clay for feet.  But Luciana didn’t like that idea and decided that she wanted to use the clay to sculpt a dinosaur scene, instead.  Which honestly was way cooler than the planned activity.  Liesl tried the thing that they were “supposed” to do, but didn’t like it and took it all apart and tried to do what Luciana had done.  But she wasn’t happy with the result and decided to just give up on it and not keep what she had done.

Then the last craft was making “fossil necklaces” by putting plastic dinosaurs into clay and making a necklace from it.  Both girls got lucky and were able to do this, but there weren’t enough supplies for everyone. 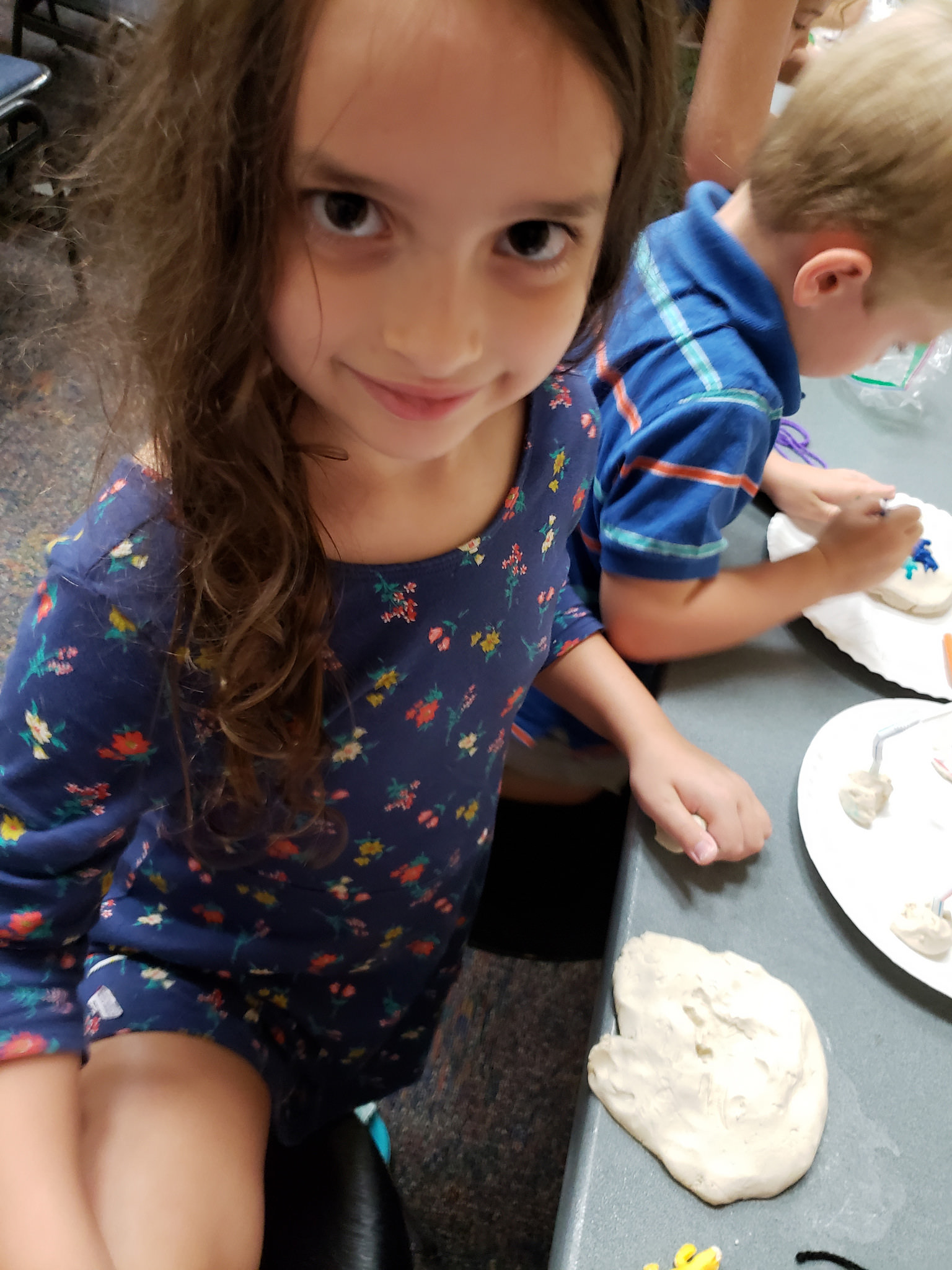 The library gave both girls (and everyone else) two tiny little dinosaur fossils to take home.  And the girls won the raffle to get fossilized dinosaur poop, too! 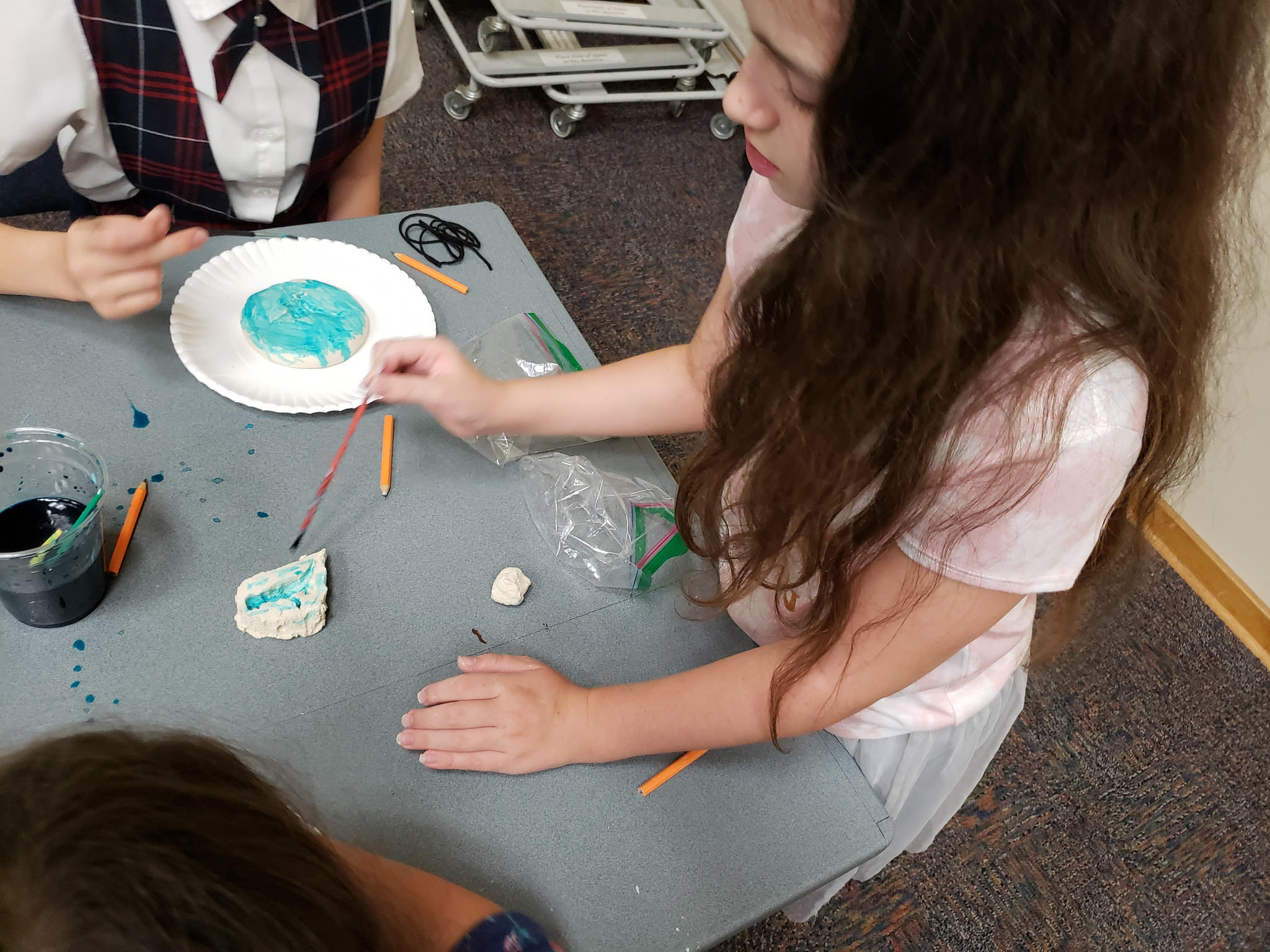 It was pretty difficult carrying all of the crafts and things back to the car to head home.  The event didn’t last as long as we had expected, so we were in the car by five thirty and home well before six. 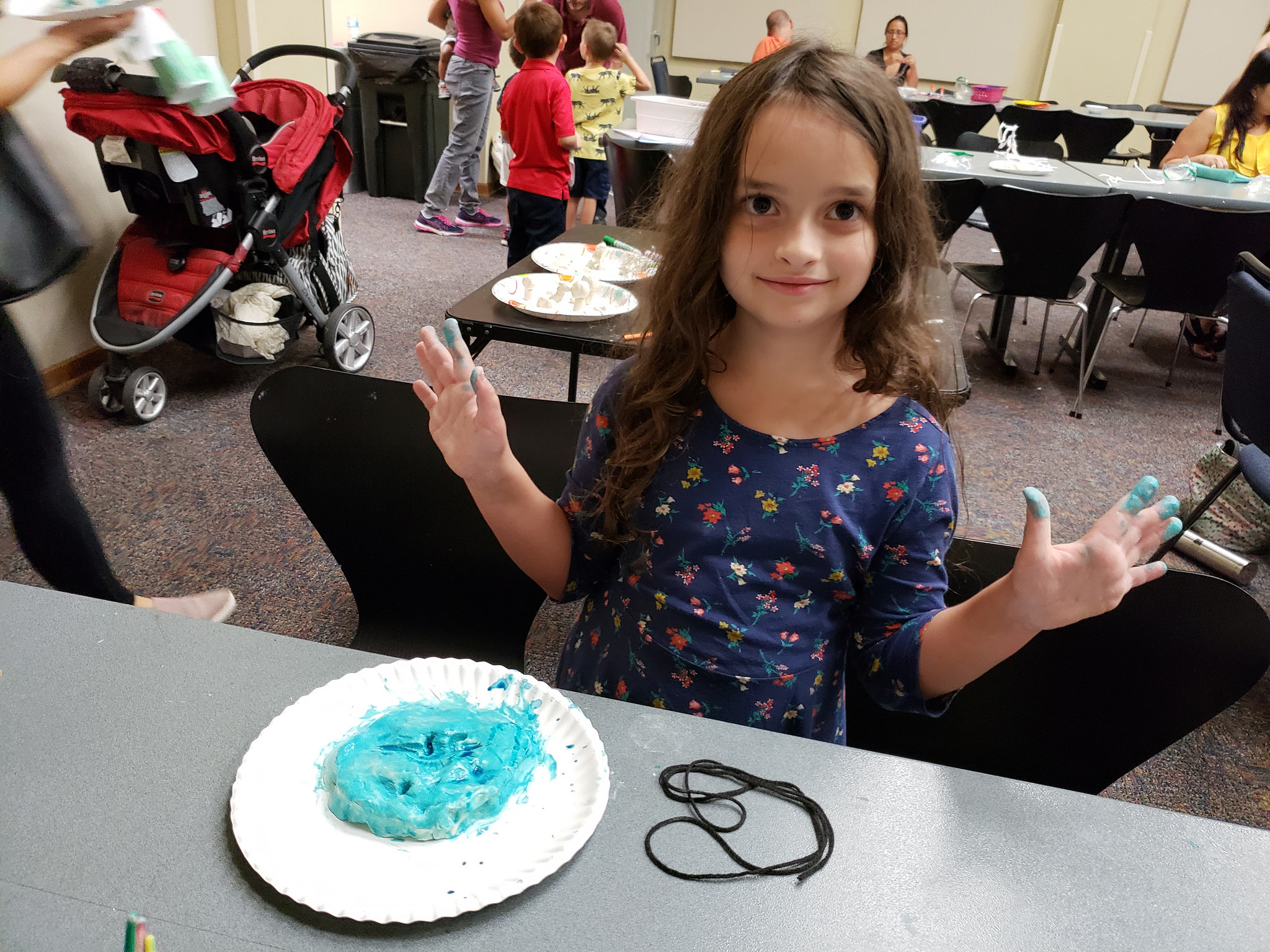 A super fun school outing and activity day.  Our libraries here really do a good job of offering things for the kids.

Once home I had a lot of work that I needed to do as I was way behind having been out of the office for so much of the day.  I had planned on being able to work from Farmer’s Branch Library while the girls did crafts, but because of it being so crowded there was no way that I could do that, I couldn’t take up any unnecessary space.  So I lost a couple of planned hours there.

So I worked for several hours while the girls relaxed and played video games with the Grices.  The Grices had been trying to Facetime them from the instant we stepped in the door.  So they did that all afternoon.

It was late, after eight, when I stepped away from the desk and we drove to Taco Bell to get dinner.  Liesl had wanted Taco Bell for lunch and Luciana had wanted Taco Bueno.  So we had compromised and did one for lunch and one for dinner.  Luciana got a pizza here (they do Pizza Hut personal pans) and Liesl got three cheesy bean & rice burritos, plus a caramel apple empenada; and she ate it all!  I got two bean burritos, as I usually do.

We got our food to go, came home, and ate it while we watched the ending of Harry Potter and the Goblet of Fire,  which has one of the endings that all of us like least in the series.  There wasn’t much left, so we then put on Harry Potter and the Order of the Phoenix which, while being Luciana’s favourite movie of the series, has the beginning that we all like the least.

We only watched part of the movie before Luciana decided that she was ready for bed.  Both girls were pretty tired.

Liesl stayed up a bit longer, first watching something, then she realized that she had forgotten to do her reading in The Witch of Blackbird Pond today, so she climbed into bed and did that before falling asleep.

I had to stay up for several hours to work to catch up a little from the time that I had lost being out of the office today.  It was closing in on three when I finally got the chance to go to bed.

If things go well tomorrow, I am hoping to take the girls to Homeschool 4H in Carrollton, which is right up the road, at half past noon.  I am pretty sure that it is something that they will really enjoy and they only get together once a month, so I do not want to miss it and have to wait an entire month before we get a chance to try it out again.

What an incredibly full day we had!  We had loads of fun and got lots of time together.  And so many educational activities.  It all worked out really well.  And Liesl made a new friend.  All in all, today was a slam dunk of success.