Today is the day! I was up at six this morning so that I could continue preparing for the trip to the UK. It is a gorgeous bright and sunny morning. Hopefully that means that there won’t be any flight problems and that we will be able to leave on time. I am glad that we are taking the red-eye to London as we don’t have time to spare but it is sad because we won’t get to see anything from the air on the off-chance that it is clear. I don’t know what the flight path is that we are taking on British Airways but it looks to me like we will probably be passing over Newfoundland at the very least. But we will be touching down in London in daylight so we will get to see England as we fly over which is pretty cool. 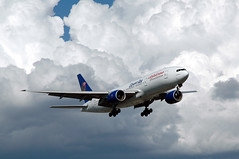 I decided that going into the office today was really a bad idea. I was up and more or less on my way in doing some early morning work from home when one of my clients scheduled work right during the time when I would have been commuting into the office (followed shortly by a meeting just before) which would either have made me rush in very, very early causing who knows what problems later when we needed to fly or to go in quite late which would be silly since I have to leave early. The only real way to get work done today was to be home all day. Dominica will be very happy about that when she gets here.

Dominica left Frankfort, New York around nine this morning and made great time. She was anticipating traffic forgetting that we live in New Jersey and that Upstate New York does not have rush hour traffic. She was practically the only car on the road! So her drive was very, very easy. We spoke at ten and she was on the New York City side of Albany on i87 heading south.

My morning was crazy busy. It is a really good thing that I stayed home. I would have been completely unable to handle the volume of work that needed to be done had I spent anytime commuting this morning. Even my normal commute early in the morning would have been a problem and would have created a backlog that I could not have recovered from today.

My other job this morning was to load up my iPod with tons of good stuff for me to listen to while on the flight tonight. The flight is almost eight hours long and if I don’t fall asleep and don’t have something to listen to then I am going to go stark raving mad. Eight hours is a really, really long time to be stuck in a seat. And if we don’t get any sleep we are going to be incredibly exhausted tomorrow morning when we have to get onto the four hour train ride from London to Stratford-upon-Avon.

We are scheduled to fly out of Newark-Liberty International Airport in Elizabeth, New Jersey this evening at eight fifty in the evening. Because this is an international flight we are required to be at the airport approximately three hours before flight time. That means that we have to be out the door here in Newark at five thirty. This is one long trip. We are scheduled to arrive at Heathrow in London at eight forty-five tomorrow morning. Five minutes short of twelve solar hours later. And then right onto a train for another four hours. This is going to be brutal. We are going to be too tired to even notice that we are in the UK!

Dominica got back to Newark at twelve thirty. We got lunch from the Cafe Airlie across the street while I kept working. What a day. Can it get any busier? Once we were done with lunch Dominica set into the packing to get all of the final details taken care of.

For those who are interested in planes, we are flying out on a British Airways Boeing 777. We are stuck with seats in the internal seating group away from the windows because I forget to check us in early yesterday evening. Had I remembered to do that we might have had windows seats. Oops. At least we are sitting together.

It was a busy day all around. Dominica was totally exhausted and so decided to take a nice long nap this afternoon while I finally took a nice, relaxing shower and shaved my head. I don’t want to have to deal with having hair in the UK in addition to everything else.

For those who are new to SGL and want to follow along with our adventures audibly in the UK, you can subscribe through great tools like Juice or iTunes via our Podcast Subscription Link. Just copy and paste into your favourite podcast aggregator and you will be good to go. Tested with Juice and iTunes and it works find.

At four thirty I set my out of office notification for work and stopped taking additional work.  I am wrapping up SGL now and calling it a day.  The next post will be from England!