This is our final morning in Belfast. We got up around eight and got the room all packed up and headed to our last UK breakfast. This will be our final opportunity for beans and mushrooms at breakfast. 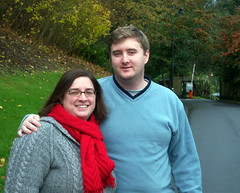 We finished eating and checked out of the room just in time for Owain to meet up with us and take us on a driving tour of Belfast. He took us down the Falls Road and the Shankill Road which are famous as the major hot spots during The Troubles. We got to see a lot of the famous murals there which was really cool.

We didn’t have a lot of time for sight seeing so everything had to be done very quickly. We got to see a lot of the Belfast neighbourhoods, Belfast Castle and Belfast Cathedral. Today we finally got a chance to take at least a few pictures in Northern Ireland so that we can prove that we were there.

Owain commented on how strange it is that many of the famous sights in town he was seeing for the first time as well.  So often we don’t manage to see the things that are local to us but will travel all over the world to see the things that the people who live there don’t bother to see.  Dominica, for example, has only entered Manhattan four times since we moved to the area almost two years ago!

We had lunch at a pub near the cathedral and then it was time to get to the airport. We learned from last time and flew today out of Belfast City Airport instead of Belfast International so we were much closer and the airport was smaller. Although both are very small. 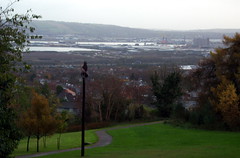 This time we had plenty of time before our flight and just waited it out at the airport. The flight back to London was quick and easy. We took the “Hotel Hoppa” to the Comfort Hotel and just crashed for the night. We tried to get online and do some updates but the Internet access at the hotel didn’t work. Which was probably best as it would have been $20 or something crazy for one night of Internet access. That is one thing that is very noticeable about the UK – nothing is ever included in the price. No matter what you want, it is extra. The prices start high and you get nothing for your money.

We watched an hour or two of BBC and got a feel for what people watch at night in London. Londoners must watch incredible amounts of television since no businesses are open, transportation shuts down around midnight and everything is too expensive to take advantage of. That pretty much just leaves television.