I awoke at seven this morning.  I have become so accustomed to waking so early recently that it is getting hard to sleep in even when I am tired.  My CPAP facemask is starting to fall apart and it is time for me to switch to the new one that I got almost a year ago.  I have been avoiding switching to it because I don’t want to go through them any faster than is absolutely necessary since they are rather expensive and dealing with the CPAP shop has been rather traumatic thus far.

We slept in a bit today as yesterday was just exhausting.  I did some work in the living room before Dominica got up.  I was up a few hours before she was.  Oreo came out and laid in the sunlight for a while.

We got breakfast from downstairs, French toast and eggs, and attempted to watch an episode of The Love Boat. Our afternoon ended up being very short.  Before we knew it we were rushing around trying to get ready for the wedding.  It is amazing how quickly the day can vanish on you when you have some place to be at four in the afternoon.

It was not a far drive to the wedding.  It was at L’Affaire Catering on US 22 in Mountainside, New Jersey.  It took us just under twenty minutes to get over there.  We ended up having plenty of time – we were there about forty-five minutes before the service started.

They had a little panic at the wedding – something happened to the officiating minister and he was unable to make it to the ceremony!  Clarence’s father, fortunately, is a minister and was able to step in without any warning.  It really caught him by surprise – arriving at his sons wedding with no intention of “having a job to do” and suddenly having to be the officiating minister!  What a day for him.  He had just come from doing his normal Sunday morning sermon(s) and was rather hoarse. 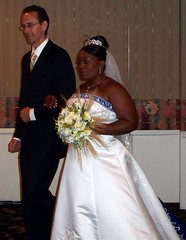 The wedding was very nice.  I tried to take lots of pictures.  I was very prepared bring two batteries for the Kodak camera.  Both, somehow, were dead.  I managed to get approximately five shots before both batteries were dead.  What a waste.  I had considered bringing the good Nikon SLR and apparenly that would have been the better decision.  One would think that by having two batteries for the same camera that these kinds of problems would not arise so often.

We had a good crowd of residents from our apartment there to see the wedding.  Nadine is very popular around here.  It was nice to get a chance to spend some time with a number of our neighbours that we do not get to see regularly or at least not very often or for very long.

After the service there was a cocktail hour while the wedding party got their pictures taken.  JC, who used to work at our building, was one of the groom’s men as well which was nice as we have not seen him for more than a minute since he left our building to take a nice airline job.

The cocktail hour was awesome.  Not only did we have fun visiting with our neighbours but the food was spectacular.  They had tons and tons of food with all kinds of different stations plus waiters coming around with different items.  The baked brie and raspberry sauce, the mushroom pasta, the penne vodka, the salmon on puff pastry with mustard sauce, etc., etc.  It was great.  It was very, very difficult not to overeat to the point of not being able to eat dinner.

Dinner was awesome as well.  This might be the best wedding food that I have ever had.  Dominica and I both had the baked salmon, mashed potatoes and veggies for dinner.  We didn’t really dance.  Dominica, being pregnant, really was not up for it and with my foot problems we figured that it was best if it was avoided.

We stayed until nine thirty or so.  The crowd was beginning to thin.  We had a really good time and were very happy to have been able to have attended.  The newlyweds are off on a honeymoon cruise shortly for more than a week.

Oreo was so upset that we were gone all day that he didn’t even eat dinner.  He just lay on the bed with us and snuggled as close as he could while we watched a little The Love Boat before going to sleep.