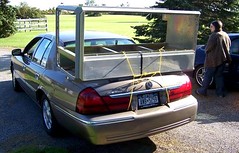 I woke up around five this morning.  I tried falling back asleep but had no luck at that.  So just a little after five thirty I got up and got ready to face the day.  I showered and got dressed and then logged in to dad’s computer and worked from his office for about two hours while I waited for everyone to wake up and get ready.  I had some work that needed my attention so this did give me a chance to do some catchup.

It was probably around nine thirty when we finally managed to head down to Castile.  Not nearly as early as we had wanted to have gotten started but sleep is important too.

The big challenge of the morning was getting the server cabinet down to the school.  Dad got it mounted onto the trunk of his car last night so there was not that much work to do today except to drive it down and to set it up.

It took quite a while to drive down to the school.  Dominica and I followed behind dad as he drove to make sure that nothing went wrong with the rack.  This is a full size server cabinet – larger, in fact, than that used in most data centers as it has a very large cooling area on the side which is not common.  So we had to drive quite slowly.

We worked down at the school from around ten until three thirty.  It does not sound like that long of a day but when you are moving computers around or setting up a rack that whole time, it gets pretty exhausting pretty quickly.  Our goal for this trip to the school was to fix their server which was failing every few days and to get the computers that they currently have onto their network again as many were now broken and to update everything that we could to OpenSUSE 11.

What we discovered when we arrived was that a very large number of the computers taht we thought that we would be using around the school were not able to function up to our bare minimum specs (which really are very low) or simply could not handle an install of OpenSUSE.  Today we managed to identify approximately eighteen machines at the school that were not going to be useful to use in any way.  Not good.  That number is just from the computer lab and the computers that we were bringing in from home.  It does not include any of the ten or so machines scattered around the school most of which appear to be similar to those unusable.

Since we were going through computers like they were going out of style, dad made a run to his house to pick up as many of the computers that we had there that were earmarked for the school as he could.  He managed to bring back seven machines.  Only two left that are ready to come down to the school so we will attempt to get those tomorrow.

Dominica worked on setting up workstations in the computer lab.  Dad worked on setting up the server cabinet and figuring out what wiring had been done and what state it was in.  By the end of the day the verdict was that we were in pretty rough shape overall.  We only had about four workstations set up in a lab that used to have ten, and we are down to nine monitors in the lab as well.  We have a lot of workstation work to do tomorrow.

Dad managed to get the rack set up and we moved the Proliant DL380 G2 into the rack before leaving but as the cabling is not terminated, nor do we know to where the cabling runs, we are stuck without any way to wire up the rack which may prove to be quite a problem.  Dad has a plan for tomorrow but we really have nothing that we can do today.  This means that tomorrow I have to backup the current server, bring it down and migrate to the new one without ever having both online at the same time.  Fun.

For lunch dad and Dominica ran over to Lorraine’s and brought food back for me.  One of the perks of working at the school is getting food from Lorraine’s on Main Street in Castile.  They have awesome food and it is so inexpensive!

Tomorrow is clearly going to be a really long and tough day at Castile when we come back.  There is so much left to be done.  A lot of the work is in deciding what things we are able to finish and which things we are not.  Tough choices.  I really wish that we had time to get things done and do it right.

We got back to dad’s around four.  We were all really tired after the work today.  We decided to pretty much just relax this evening and to get to bed early. Dad went down to Davis’ Farm Market in Pavilion and brought back pizza for us and grilled cheese for Dominica.

We watched Freaky Friday, the new one with Lindsay Lohan and Jamie Lee Curtis.  Then we watched Agent Cody Banks.  It is weird being at dad’s house and trying to pick out movies to watch from our collection.  We have so many movies to which we have not had regular access in over two years so we really begin to forget that they are there.  There are so many movies in the collection that I have no memory of having; it is really weird.

We went to bed around ten thirty or so.  Tomorrow is going to be a long day and sleep is important.  Tomorrow, after working at Castile all day, Dominica and I will be driving down to Ithaca to make a quick delivery and from there heading back down to Newark.  It is going to be a very, very long day.

At very least the weather has been great. Sunny and cool with a nice breeze.  The school still gets really hot, though, even with the windows open and a fan in the doorway.  So tomorrow we are bringing a window fan to force some air into the computer lab.