Dominica is no longer pregnant; we have had our baby!

At eleven last night, after Liesl had gone off to sleep and Dominica was just being monitored after her surgery, we decided that there was no benefit to me staying at the hospital through the night and that there was almost no chance of me being able to get any sleep at all if I was to stay there with Dominica so I drove home.  It was a very good thing that I went home since I was home and in bed, snuggled with Oreo, well before midnight.  Dominica wasn’t even moved to the new post-partum room until midnight or later and she was interrupted all night long.  She said that I would not have slept at all.  As it was I was able to get six hours or more of sleep and Oreo was very thankful to have his dad with whom to snuggle. 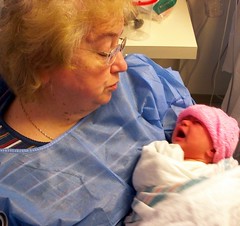 I got up at six thirty this morning and went into the hospital at seven.  At seven thrity Liesl was being examed by her intensive care pediatrician to see how she is doing today.  I went in and spent the early morning with Dominica who got no sleep at all last night.  She has now been almost completely awake for four nights!  It is amazing that she is functioning at all.

Dominica was actually feeling pretty good this morning.  She has been recovering well from the surgery.  She was surprisingly spunky this morning (although still tied to her operating bed.)

The pediatrician came in at almost nine to talk to us about Liesl.  The results from this morning’s blood work showed that her antibody count had risen which meant that there was a pretty decent chance that she was battling, in some form, Group B Streptococcus (Strep B) which is the most common cause of sepsis and meningitis in newborns.  Her levels had risen in comparison with the levels that they saw last night.

The bottom line at this point is that Liesl is in a high risk category for sepsis or meningitis and additional steps need to be taken to protect her.  So far there is no sign of an actual infection only signs pointing towards the possibility of one, but it would be very risky to simply assume that nothing is wrong.  So, unfortunately, Liesl had to have a spinal tap this morning so that they could draw fluid and determine whether or not there is a brain infection currently.

Dominica and I were, understandably, very upset to find out that Liesl had to have a spinal tap.  What a way to enter the world – long labor, c-section, seperated from your parents, hooked up to monitors since birth and now a spinal tap.  Not to mention the regular blood draws.  It’s been a rough twelve hours for our little girl.

Since it is black Friday I went online to Amazon and took advantage of their online sale.  There is only so much stuff that we need or want but I looked around and found a good deal on Transformers on BluRay as well as an item that I have been wanting to get for Dominica for Christmas.  So I have that item out of the way now.

Dominica got cleared to be able to feed Liesl on demand late this morning which was a huge relief.  They have barely seen each other yet except for one brief feeding last night just when Dominica’s parents and I left the hospital.  The two of them got to spend a lot of time together today.  Our “hotel” room at the hospital, room 212, is right next door to the nursery making visiting really easy.

Dominica made a lot of recovery today from her surgery.  By noon she was even walking which is pretty amazing.

I set up shop in the hospital with my laptop and got logged into the office so that I could work.  It is the Friday after Thanksgiving which is one of the slowest work days of the year.  It is almost a four day weekend.  The market is only open for a half day today.  Unfortunately I am scheduled for quite a bit of late work this evening so I actually have more to do hours after everyone else has left than most anyone else has all day, and I am scheduled to work tomorrow morning as well as eight in the morning.

I finally managed to get the first 59 pictures of Liesl posted to Flickr this afternoon.  The only picture of our little girl that has gone out yet is one single image taken with Dominica’s mother’s phone that she txt messaged out to one or two people with phones that could accept the image.  Mine is not one of them.  I have not seen that picture yet.  Everyone in my family had to wait until I had a chance to upload the pictures that were on our Kodak digicam today almost a full day after Liesl was born.

I got to hold Liesl while she slept for a full hour before I left the hospital at four thirty to come home and do the evening deployments.  My laptop’s right “mouse button” is broken and that makes many tasks nearly impossible.  I need to have a mouse with me at all time when using the laptop.

I worked quite a bit this evening.  Much more than I had been expecting.  I ended up putting in a good portion of the day starting after five in the evening.  I am also scheduled to work again tomorrow morning so I have to be in bed early tonight so that I have a chance to get some sleep.

While I was working Dominica’s parents went over to the hospital to see Dominica before visiting hours were over.  I am not bound by visiting hours but everyone else is.  They got back to the house at eight thirty and then we headed out to get dinner.

I took the time to collect the Twitter transcripts from this past week starting with dad leaving Peekskill and going through all twenty seven hours of the labor process, the surgery, recovering and up until Liesl was free to feed today and things were as “normal” as they were going to be until she and her mother get to come home.  Amazingly, I posted approximately 1,100 words during that time window almost all of which were posted via a BlackBerry keyboard and most of which were cross-posted to FaceBook.  We had a lot of people following allow in one place or another.  SGL alone registered approximately one hundred additional readers during the days that Dominica was in the hospital and about as many were checking on us through FaceBook.

We had dinner at New City Diner in Yorktown Heights.  After dinner I went back over to the hospital for a little more than an hour.  I timed it pretty perfectly so that I arrived while Liesl was in the middle of a feeding so she and Dominica were awake.  Dominica still hasn’t slept since around Monday!  So I got to visit with them while Liesl was eating and then I got to hold her for a while once she was done.  I even got a chance to change my first diaper.

I left the hospital a little past eleven.  I was very exhausted.  Oreo was, of course, very excited to see me.  I came in the door and he ran to meet me.  I looked at him and said “Bed time?”  He looked up the stairs and then looked back at me.  I said “Yes”, and he turned and went straight up stairs and got into bed.