Thus it begins.  Today is the beginning of the crazy long drive from Frankfort, New York to Houston, Texas.   No one got as much sleep last night as we should have but it was not too bad.  I slept in as late as possible this morning.  Dominica got me up at a quarter till seven.  Our goal was to be on the road by seven but we had to wait for the Friendly Bakery in Frankfort to have our cookie order ready that we are delivering to Houston with us.  Francesca was up much earlier than me.  I think that she got up around five or so. 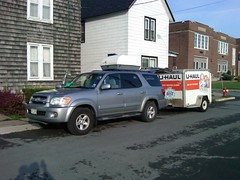 There was a bit of packing to be done this morning before we could get on to the road.  Dominica packed up my stuff while I was getting ready and Francesca and the family packed the last of the trailer and the trunk of the car.  Boy are we ever taking a lot of stuff with us.  This is quite the load.

The cookies did not end up being ready until nine so we were delayed pretty significantly over what we had hoped to have been able to do today.  It was minutes after nine when we finally got out the door and into the car and pulled out of Frankfort.  Francesca took the first driving shift to get us out of the area.  The weather was perfect for driving today.  Clear and calm.

We took the New York Thruway west.  Nothing that we have not done hundreds of times before.  Francesca took the “boring” area for me driving through New York, Pennsylvania and most of Ohio.  All areas that I have driven through many times before and know backwards and forwards.  As far as Columbus, Ohio we covered area that I knew really well and driving the same roads over and over does nothing to keep me awake, but once we switched on to Interstate 70 in Columbus shifting our direction towards Dayton it became new territory. 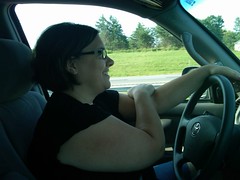 The awesome thing about this trip is that we are Twittering from the car as well as testing out the new BlackBerry Tour with Google Latitude which is constantly updating everyone, every few minutes, as to our position.  So everyone was logging in to SGL to watch the map change and see exactly where we were.  Very neat.

Francesca drove all the way to Dayton.  We switched drivers there at a quarter until seven in the evening.  Francesca had driven for almost ten hours when we switched!  I was completely fresh at that point and barely felt like we had been in the car at all.  I took over on the “new” territory and drove us from western Ohio through Indiana and Illinois while we still had some daylight.  Early into Illinois we lost our sunlight which was a bit sad because both Francesca and I really wanted to see Missouri as neither of us had ever been there before.  We entered Illinois just before ten and did our final fuel stop there at eleven (that is still eastern time even though we switched to central time officially in Indiana.) 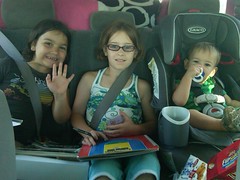 Coming into St. Louis was really awesome.  We could see the arch from quite some way away.  All lit up and signaling our arrival at the Mississippi River.  I have always wanted to see St. Louis.  It was a neat city to see even if we had to see it in the dark and only briefly as we zipped in on 70 and picked up Interstate 44 heading southwest through Missouri.

It was just before midnight when we entered Missouri.  We have a long way to go.  We have been driving for fifteen hours so we are approximately haflway to Houston.  The original plan was to drive until roughly midnight and then to grab a hotel.  But Francesca was very much awake and I was completely fresh still and did not need a break at all so we just pushed on through the night.  No reason to take a break and prolong the drive especially as sleeping on the road is extra hard when you have to get right to bed and only sleep a few hours and jump up, repack and get on the road again.  Not very effective and rather expensive.  So skipping the sleep it is for us.