After finally managing to fall asleep last night at two in the morning I miraculously slept for eleven hours not waking up until one in the afternoon!  It was awesome.  I am feeling so much better now.  Getting that sleep gave my body the strength that it needed to beat back this flu and put me back on my feet.  I am still nowhere near functioning at one hundred percent but I am much improved and much happier. 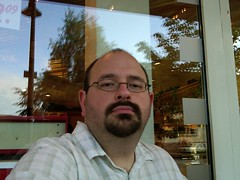 I set about charging up my dead mobile phone, showering and continuing to work on picture uploads.  I did not want to leave the hotel without my mobile being ready.  After yesterday I definitely do not want to take any chances like that.  That also gave me a little time to just relax in the hotel room without stressing myself out by going outside and facing a foreign country with very little English interface here in a completely non-touristy area.

It was around three thirty when I finally set out for my afternoon hike.  I have nothing planned for today and my goal is to see some more of authenticate Germany without the slightest hit of being a tourist so I simply headed southwest from Osnabruck on one of the main roads. This is where adventure starts.

Here is a map of the route that I walked not including any little side excursions that I might have taken. 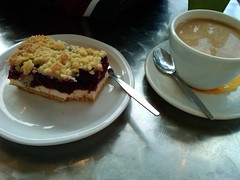 My walk was very pleasant.  The Germans really understand the importance of pedestrian infrastructure and have bicycle lanes and sidewalks absolutely everywhere.  It is not like the US where you are simply expected to walk on the road or to have a car, period.  This place actually plans around people using purely green and healthy modes of transportation.  It is much appreciated by those of us who like to walk to get places.  Safe and easy it is around here.

I left Osnabruck to the southwest and walked through Hellern, which is really just a suburn of Osnabruck where you don’t even notice the transition from one to the other.  From Hellern I went out into the countryside and got to experience farms and fields.  It was very nice.  Heavy cloud cover but no rain.  Very good walking weather.  I took along my rain jacket but did not need it.  I was just a little too warm but there was a nice breeze out of the north.

From Hellern it was a good hike out to the village of Hasbergen.  This is what I wanted – to actually get away from Osnabruck and experience a little bit of life in a small German village.  Hasbergen is definitely small but a real, lively little village.  Probably similar to Avon, Warsaw or Frankfort back home in New York.  It has a grocery store (an Aldi) and a little downtown area with some local shops and professional practices.  It also has its own train station which makes it a very attractive little location in which to be.  I would love to live in a small village with a train station.  What an awesome combination.

By the time that I reached Halbergen, which was almost five kilometers from the outskirts of Osnabruck where I started my walk, it had occurred to me that I had skipped both breakfast and lunch today and was getting rather peckish.  I discovered a little bakery there, part of a chain called Wellmann’s that appears to be popular around here.  I did some research and it appears to be an Osnabruck chain only available in the city and the neighbouring villages.  So I somehow managed to stumble upon a little slice of Osnabruck culture here.  Very cool.

I was surprised to find that one of the Varusschlacht memorial art pieces was here in Halbergen.  I had not really had any hopes of finding any of there and here I walked right past one today!  What good fortune. 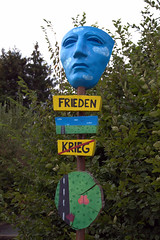 I stopped in and struggled through the language barrier and ordered a piece of cherry cut cake and a cup of coffee.  I took it out to the front of the store and enjoyed having a chance to just stop and relax in the afternoon air in a small German town.  Very nice.

I was surprised to find that, at least here, the desserts are not nearly as sweet as you would expect them to be in Germany.  I had read this recently that only in the very south of Germany and in Switzerland do they really have the excessively sweet desserts that much of the outside world associates with Germany and even there, apparently, it is not all that common.  The cut cake was very good and tasty but more fruity and bready than I would have expected.  Much healthier, I am sure.

Once the bakery closed I packed up and started my long walk back to Osnabruck.  I had been thinking about stopping someplace for dinner on the way back, maybe for some pizza, but none of the places that I saw on my walk looked very inviting and it was really hard to be able to tell if any of them were really open or not.  I decided to get back to the hotel, clean up a bit and find out from the hotel where they would recommend.

Once I was back to the hotel I was quite starving.  I had seen that there was a Subway directly next to the hotel across the highway to the north and had been contemplating how simple it would be to just eat there.  I asked at the front desk and they said that there was nothing but the Subway within walking distance – I am assuming that their definition of walking distance is not the same as mine but basically it was going to be an effort to get to anything and I did not feel like spending the money to eat in the hotel again nor was the menu sounding all that appealing.  So over to the Subway it was for me. 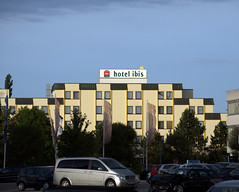 I was surprised to find that the entire menu was actually in English.  They did not bother to translate it into German.  I was able to order by simply saying “Ein footlong tuna sub, bitte.”  Not much of a challenge.  I had been hoping to get a veggie patty sub, which they have there, but they were out.

The subs here are a little different than in the US.  They use less tuna than we do – maybe half as much.  And a little less cheese and they don’t have the different types of cheese from which to choose – just one and they put that on automatically which is fine for me but a little surprising.  If you ask for mayo, which I do not recommend, you get plenty.  Easily double what they apply in the US and it is definitely not the same mayo, not bad, but different.  If you resist adding mayo then it is a much healthier (and less costly to produce) sub than its American counterpart.  I was quite happy with it and it did not cost me an arm and a leg although it was probably about ten dollars with the cookie and soft drink (Fanta is extremely popular here.)

So that was my food for the day.  One footlong tunafish salad sub from Subway with a single macadamia nut cookie and my slice of cut cake at Wellmann’s.  Pretty light eating for a day of walking.

After dinner I settled into the hotel to catch up on the picture postings and to get SGL updated.  It is really hard keeping up with the number of pictures that I have pouring in from these walks.

My plan for tomorrow is to walk around Osnabruck itself to see the historic sites.  I really want to see the Osnabrucker Rathaus where the treaty ending the Thirty Year War was signed.  Most of Osnabruck was flattened in World War II so much of the city is new but there is a part of the city, Heger Tor, that still stands and I want to take a walk through that area as well.  If possible I am hoping to get out to a real German gasthaus for lunch or dinner.  Hopefully the hotel will be able to make a suggestion for me.

I am going to be staying in Osnabruck for an extra day.  I have check with Die Bahn and they have early morning connections into Amsterdam Schiphol Airport so that I can just walk down to the Osnabruck Haptbahnhof (or more likely take a taxi as that is a long way to go with luggage) and catch an early morning train that will take me directly to the airport without any problem at all.  Having the train station inside of Schiphol was a genius move.  It really makes Schiphol a premium jumping off point for exploring continental Europe with a minimum of hassle.

In non-German news for the day, the folks at Facebook seriously, seriously pulled on over on the TechCrunch guys: Facebook Punks Techcrunch.