Thursday.  Today was my day of dealing with Intuit all day in a fruitless attempt to roll out QuickBooks Enterprise.  What should have been a nearly effortless process of simply spending loads of money turned into quite the unbelievable project.  What’s really interesting is that, completely by chance, I had to spend the day working with Intuit trying to roll out QBE for a customer, while Dominica was hard at work with Intuit rolling out QBPro for us!

What really created problems is that Intuit hides how they handle their hosting and don’t make it clear, whatosever, that their hosted product goes through a third party, because my customers, and rightfully so, were not interested in third party hosting and were really looking at it because they thought that they would have end to end internal support from Intuit which, it turns out, is not even remotely the case.

And to add fuel to the fire, the reason that we looked into hosted QuickBooks at all was because Intuit advertises, in several places, that their hosted version comes with a web interface that is clearly not available in their normal product.  This add on was key to making QuickBooks nearly a business class software package.  Third party hosts did not offer this, so getting Intuits deal was unique and hugely valuable for that one feature.  Well, once we talked to Intuit sales, they admitted that that was completely fabricated, the website was flatly lying, and no such feature ever existed whatsoever. It was just made up to sell product.

There were so many things that were technically a disaster and ethically inappropriate, I truly never want to have to deal with this company and honestly, I would not trust them hosting financial data if I had any choice.  Ethics have never been one of their strong suits and they are the pioneers of modern Ghost Ship Software.  But often we have little or no choice due to how accountant works.  But it always makes me wonder why accountants would be comfortable doing business with them, are their concerns around ethics and being able to trust vendors that distant from IT’s concerns?  If so, why?  What makes accountants trusting of dishonest people?

So we had to bail on getting QBE hosted, as that was not going to meet our needs at all.  The licensing and costs were not even close to what we had been quoted, either.  The “things we had been misled about” just piled up and up.  It was insane.  The whole day was just one shoe dropping after another.  It seems that nothing we were told or that was advertised was true.

To make things even more ridiculous we ended up with a trial of the hosted product that we had long enough to log into and realize just had sloppy the hosted product was.  It is bad enough that getting hosted QBE requires an RDP connection to a remote server, but that is a QB problem, and not a hosting one per se.  But pretty basic hosting principles say that when hosting a remote application that you don’t host the full desktop, but only the application.  This is for performance, ease of use, integration, and security.  But that is not what they did, a full remote desktop was provided which is just beyond silly.  But that’s not nearly the bad part.  Today, Windows Server 2016 is fully mature and Server 2019 is due out, as early as next month.  But was the QuickBooks environment running on Windows Server 2016 or even its predecessor Server 2012 R2?  No, nor its predecessor.  In fact, QB was running off of ancient Windows Server 2008 R2, a product so old and so ridiculous that even a small business using it for simple internal functions would be embarrassed if you found it running there.  For a hosting company, let alone Intuit’s sole hosting partner, to be running this and only this speaks volumes about both Intuit’s and their partners view of the software and Intuit’s customers.

So, obviously, we decided to host QuickBooks ourselves and in just a few hours had a vastly more advanced, secure, performant, modern, and respectable hosting environment for our users that costs us far less, takes less effort to manage, and gives us far more protect and flexibility than before.  And it addressed some technical problems that we were going to have to just overlook if we went with Intuit’s own hosting product.

So that pretty much summed up my day. I dealt with that, almost the entire day and it was supremely frustrating.  But, at least, at the end of the day we have a well architected solution that we are pretty pleased with, and was already working well before we called it a day.  Now we have an awesome Windows Server 2016 RDS Application Server, with QuickBooks Enterprise and Sage Peachtree 50 all running and replacing our old VPN. This is actually quite slick.

Dominica’s day with QuickBooks went much better.  Although she had to train their technical support how to access it from Ubuntu, which was pretty funny.  Both she and I had to do Ubuntu and Fedora access to it today, and the QB techs had no idea how that worked.  She did tech set up this morning and had her first QB accounting lessons this afternoon.  So she had a very busy day between doing the kids’ school, QB setup, QB school of her own, and she just got a deal to do a new website that will start next week.  So a very busy day.

Kat was supposed to come over tonight for our nearly regular cheese tray Thursday evening, but she got stuck at work or something and it was too late to come out.  So we will not see her until next week.  So just a quiet evening in.  Dominica and I are planning on going out to Denton with Rachel tomorrow night, so are not too interested in doing anything tonight.  Dominica is not completely sure that she is going, but she is thinking about it.  I am definitely going, as long as work does not need me too much, but as I am Rachel’s driver, I need to go if possible.  And we were out a bit this week already, so no one is really feeling like doing much of anything tonight anyway.

The girls decided that they wanted to watch a show with me tonight, so we snuggled on the couch and watched Netflix’ Nailed It. 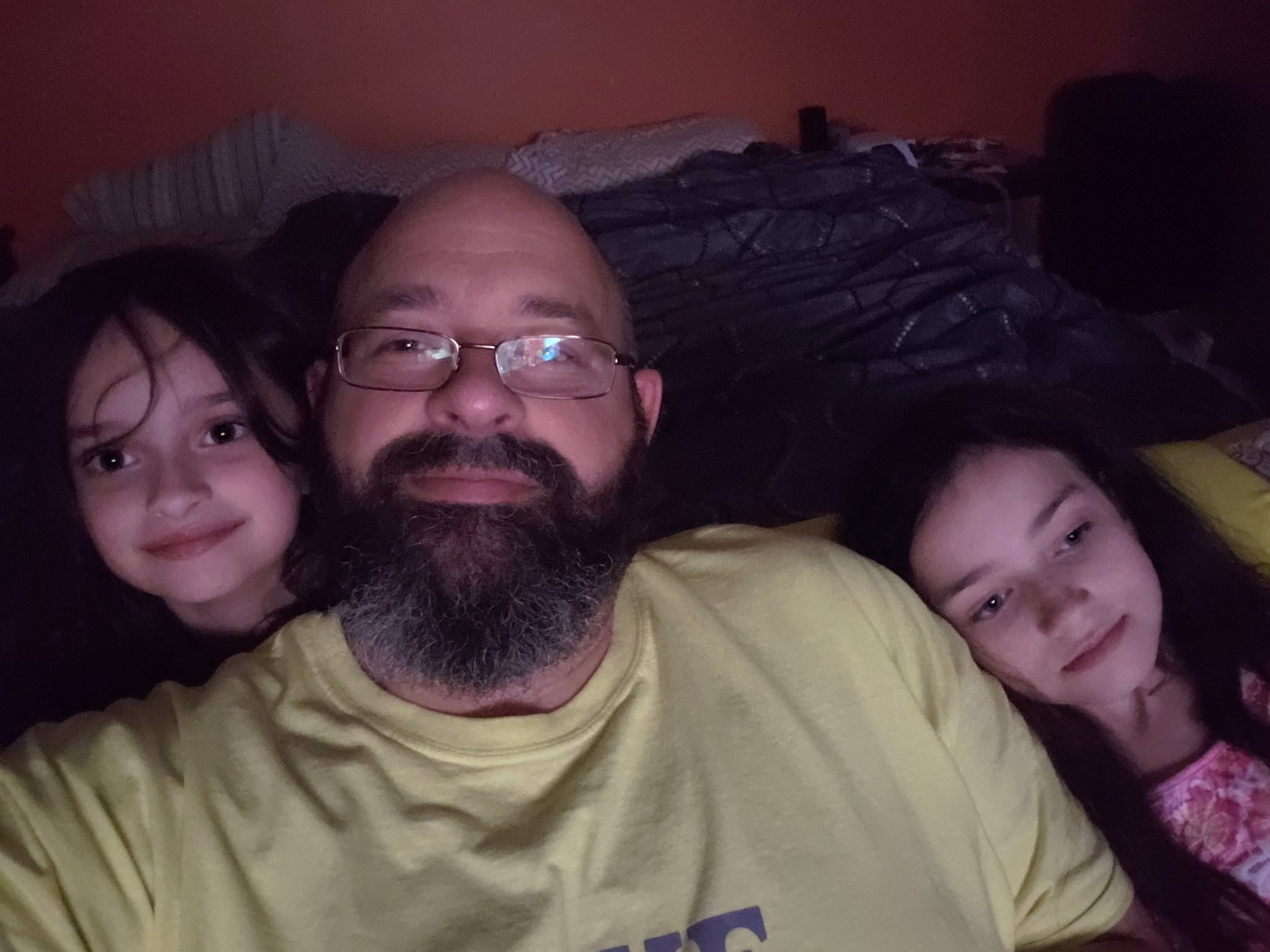