It’s Friday, and boy do I need it this week.  I am worn out, things have just been way too crazy all week.  Thankfully I managed to sleep in until about nine this morning, having stayed up working until really late last night.

The girls had school today.  Their attitudes were great.  Yesterday was kind of bad and so they are on a no devices before or during school rule, now.  But they are so excited to get to five this evening and be allowed to play their new Portal Knights game.  So they were just happy as could be, wanting to be good for that.

Once the five o’clock whistle blew, the girls came screaming through the house to turn on Portal Knight and they got right into it.  They continue to love the game.  They put in over four hours on it last night on their first evening playing, we will see how much they play today. 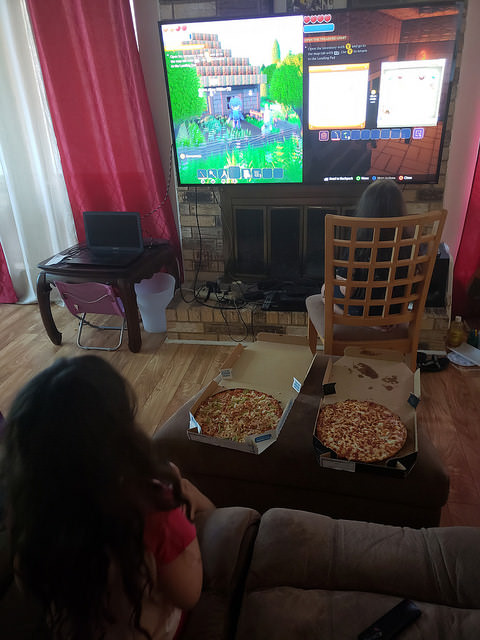 Everyone (except for me, of course) felt like pizza for dinner, so I ordered in Dominos for everybody.  Four pizzas for four people.  Liesl gets a thin crust onions and green peppers.  Luciana gets a hand tossed plain cheese.  Dominica gets stuffed cheesy bread.  Paul gets a thin crust pepperoni.  And I get to place the order and make myself a salad.

While waiting on other things today, I have managed to get a lot of the 2017 SGL back log taken care of.  By early evening all of the gaps throughout the entire year have been closed except for a small window from late August to early September that I am working on now.  Once that is done, only the missed days in 2018 will be left!

This past week I topped six thousand posts on SGL!  Not a shabby number.  I’ve been doing this for a long time now.  That’s enough for one post each day for 16.4 years.  But I’ve actually been doing the blogging for 18.6 years now so some days have definitely been missed.  But I’ve actually gotten a bit over 6K now, so it’s awfully close to daily and I’m still doing a little catch up yet for the last few months.

Speaking of catching up, all days in 2017 are now accounted for!  Only 2018 days still need some catching up.  But loads and loads of progress at this point.  Although boy is there a lot to catch up on in 2018.  It has been such a tough year, been a hard one to talk about, really.

Everyone went to bed early on me tonight.  I played a little Andromeda, maybe forty five minutes, just to get past one spot where Liesl and I were stuck from the other day.  She wants to play Andromeda with me tomorrow, so I did not want to go too far.  She is really good at the next part so I will just save that for her.  I was not really feeling it so much tonight, by the time that I managed to sit down and play.

It was after eleven when I finally managed to have my dinner.  I just had some microwaved veggie chicken style patties and some almonds while I played my game.

Luciana has been asking to play a Final Fantasy game.  So since the system was idle I downloaded Final Fantasy X | X-2 HD for her to try out.  It is a huge game, 36GB for the initial download.

I didn’t stay up too late tonight, but after one.  So several hours after everyone else had gone to bed.