I can’t believe that I woke up on my own at 6:30 this morning. I am starting to adjust to this regular work schedule deal. I think that I actually get a lot more done if I get started early in the morning. I seem to be more productive.

Dad picked me up at 7:30 and it was our regular breakfast at the Omega Grill. Dominica continued to sleep in. Today is her one decent shot at catching up on some of that sleep that she has been missing for the past two weeks. After breakfast we went up to the city to do some banking and a little shopping at Office Depot and Home Depot.

I was home by 11:00 and when I got home Min and Oreo decided to get out of bed. Twelve hours should help her with her sleep deprivation. She then went grocery shopping over at Super Walmart since we were out of just about everything in the house.

Eric came over just as Min was getting back from shopping. He brought me a Stericycle cap. He has one too. Eric is still without a computer up has his office so he has to come here still to even check his email. What a pain that is. At least he found out yesterday that he is getting his college paid for now so he is able to go for free. I have always recommended getting a job that pays for college because that is so much more valuable than paying for it first and then trying to build up experience. We spent some time looking into degree options from Empire State College. He is hoping to be able to begin taking classes right away in the spring. That isn’t too far away. I even managed to get him to call the school today to get the ball rolling. 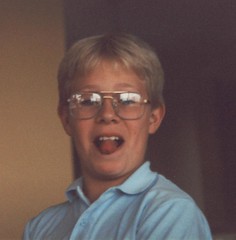 As punishment for never reading SGL I have decided to include this incredibly cool picture of Eric. Yes folks, that is correct, this is Eric J. Millen. This picture is from sometime in elementary school but I have no idea when. Probably around sixth grade. The picture was taken in my parent’s living room. That is about all that I know. Eric might possibly be able to fill in more details but, he is unlikely to ever bother to read this page to even know that the picture is posted here. He has yet to notice any of the others.

While trying to pick out movies to borrow today, Eric was looking at The Explorers and suddenly remembered the movie and remembered that it was he and I that had gone to see that movie together in the theatres when it first came out. I guess that that means that Eric and I have known each other for over twenty years now. Wow am I feeling old. Nate and I have known each other for just about twenty three years. Jonathan Stagno and I are coming up on twenty five!

Dominica is thinking about going back to college as well and getting an MIS degree. If they do it right they are likely to be able to overlap in several classes. Eric is only reimbursed for going half time but Min will probably go full time to wrap things up as quickly as possible since she probably only needs to take eight classes in order to graduate. At least that is what we are hoping. Since she already has a BS degree from SUNY we are hoping that she is in really good shape for getting a second one.

After working on some college stuff for a while we went down to the theatre and played some Dreamcast. Working from home can be tough.

I went down to Richardson’s at 7:00 so that Jeremy and I could practice the song that we are going to sing at the interment on Saturday. It took us a while to settle on a song. We finally decided to go with the classic “Abide with Me” just like Garrison Keeler would use. We went over to grandma’s empty apartment with my Aunt Sharon and Uncle Leo and we practiced the song. Sharon and Leo sang along to help us learn the song since neither of us really knew the tune very well and then we decided that we should do the song as a family. So my cousin Sara is going to join in as well. We are going to get together tomorrow night to practice again.

Jeremy and I ran down to Cook’s in Greigsville to cut some subs for dinner. We ate down there and then I took him home and came back up to Geneseo where I had to get some dishes and other household chores done before Min came home from work so that she would think that I was being productive.

Min called while I was working on the SGL podcast and had me run over to Tim Horton’s to meet her for coffee so that we could discuss some work that she was doing for her A+ class. I did have time to clean the stinky hamster’s cage before leaving. I can’t believe how quickly he manages to make a mess of that cage these days.