I got home last night, we watched a little Full House and I was off to bed. I even fell asleep for a little bit before managing to get off to bed. I was totally exhausted.

This morning was absolutely gorgeous outside – as yesterday was but I totally missed that – and so we decided to get up and get moving and go see the Cherry Blossom Festival which is promising to actually have cherry blossoms today. I was up at seven thirty after an entire week of being on the early shift and Dominica got up just a little after eight.

Our friend Jeffrey came over and we drove up to IHOP for breakfast before the after-church crowd hits and then we drove up to Branch Brook Park for the blossoms. The trees really were in bloom today and it was quite nice. It is hard to believe that this is one of the largest cherry blossom displays anywhere though. It seemed awfully small to me. I took along the Kodak digicam which was a mistake because the sun was so bright that I really needed the Nikon with its filter sets and aperture control but oh well. I took the Elura 60 but I have no had a chance yet to check the video to see if it is any good. 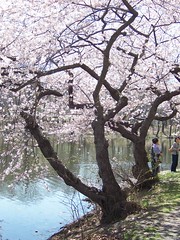 The cherry blossoms were beautiful and the sun was shining. Oreo had a great time running around the park and we managed to get some exercise and fresh air ourselves. I hope to get a video together of the park over the next few days but it will be Tuesday at the earliest that anyone will get to see it. There are several pictures up on Flickr to check out.

We got home around two and mostly relaxed for the day. Originally we were going to pick up Susan from the airport as she flew in from Phoenix but her flight got delayed… until tomorrow morning. So she doesn’t need us today. So we decided that we needed to do some shopping.

We drove north to Clifton and hit Game Stop. No Wiis yet (I don’t want one anymore but Dominica still wants one) but we did find headsets for our Nintendo DSs. I am looking for Rogue Galaxy but haven’t seen it anywhere yet. We had dinner at Chipotle. It was okay but nothing special. The price wasn’t too bad and we were quite full when we were done but we won’t be going there very often. Nothing compared to the price or quality of Desert Moon Cafe.

We went to Target and actually found a fair amount of stuff that we were looking for. Several DVDs and CDs and some miscellaneous supplies. It was a good trip and we enjoyed having more time to drive around in the BMW with the top down.

It was a lazy night. But I had homework that I had to do so I had to take care of that. No rest for the weary.  It was after midnight before I got off to bed.  But I don’t have to be up early tomorrow.