I was up at five this morning. If only as a child I would have known what my work schedule would be like as an adult. I might never have grown up. I got into the office but it was a slow morning again. Pheww. 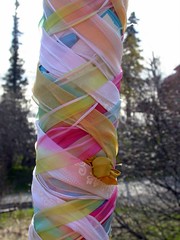 I decided that we needed a picture of a maypole today. Today Dominica scheduled the second of her two CompTIA A+ exams. She is scheduled to take the test on May 9th – the day before we leave for Florida. So that is Wednesday.

Dad called right about noon to let me know that the house in Geneseo officially closed. It is sold and no longer any concern of ours! We are so excited. That has been such a burden for so long. That is so much that we just don’t have to worry about now.  Today is a happy day.

Today was a pretty slow day.  I got a lot of work done and headed for home around half past three.  Unfortunately Interstate 78 was closed due to an accident so we were all rerouted to some town that I didn’t know going in the wrong direction so I had to hop off of the highway and just start wandering around trying to figure out how to get back to Newark.  So, once again, getting home took over an hour even though I left long before rush hour.

Tonight we just relaxed as we know that Dominica has to start pounding on the A+ and do nothing but that until she takes her test next week.  But the house being sold is a major stress reliever and as soon as she takes her A+ test we will be off to Walt Disney World for our mini-vacation.  So the timing is perfect.  She will be really ready for that.