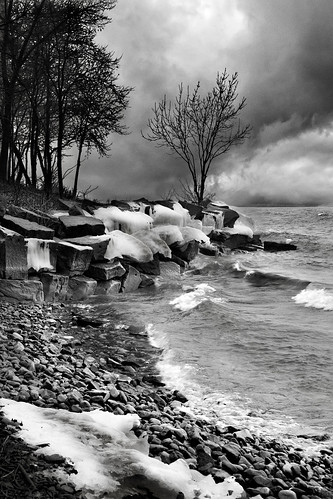 I just couldn’t resist this amazing picture of the Lake Ontario shoreline by Hodge from Niagara Falls, Canada. This is just beautiful.  I do miss the Great Lakes.

Today was really busy at work.  I spent about five hours on a long continuous phone call (technically there was a few minutes break in the middle but that was it.)  I was really burnt out by the end of the day.

About an hour before leaving work it started to rain and quickly turned into a flood making downpour.  Traffic is going to be terrible tonight.

I left work and ended up sitting in what seemed to be an endless traffic jam that would never end.  Rain always causes serious issues in New Jersey.  No one can handle driving in rain at all.

It ended up taking so long for me to get anywhere close to home I called Dominica who was in Rutherford with Oreo getting him some shots at his vet to see if she wanted to get dinner in Clifton and try to see Harry Potter and the Order of the Phoenix tonight.  She thought that that was a great idea as we had tried yesterday and failed and were thinking of trying tomorrow but that is not looking promising.

It took me three and a half hours to go from Warren to Clifton!  Some of the roads are completely underwater.  Under no traffic conditions the drive should have been around forty minutes or maybe less!

We ate dinner at Chevy’s which was perfect because they were really fast.  We walked over to the theatre and got really good seats, amazingly.

The movie was good.  It is the fifth installment in the Harry Potter series and was very much in line with the third and fourth installments which were all better than the first two.

It was just minutes before one in the morning when we rolled into 1180.  Time for bed.