I got twenty or more pictures scanned in and uploaded to Flickr last night. Good stuff in there. Lots of old stuff from long ago and the first batch of my sports photography stuff. I am quite proud of the work that I was able to do in high school taking sports pictures using my Nikon 5005 film rig. I did most of my black and white sports work using Eastman Kodak’s high performance 3200 ISO film and did my own darkroom work. I am scanning everything, good and bad, which is tough because generally photographers only show one percent or less of the pictures that they take but I want the collection online so only the totally worthless stuff isn’t going in. So don’t expect every picture to be great. This is raw stuff and many years old and scanned on a cheap scanner. 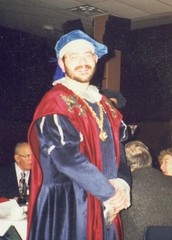 Today ended up being a completely crazy at work. I was going nuts all day. I came into work early at six thirty planning on being able to leave quite early and to be able to get on the road the moment that Dominica got home. No such luck. I ended up having to work late so that I put in a twelve hour day. Not what I was hoping for at all. I was totally exhausted by the time that I got back to Newark so that we could start packing up the car.

It was about twenty after seven when Dominica and I finally managed to get onto the road.  We are taking the BMW up because it needs to go into the shop tomorrow for its New York State Inspection.  Luckily we were able to get an appointment for it.

Our drive felt like it took forever.  We stopped at Burger King on the road and grabbed a quick dinner while we traveled.  Not in the diet, I know, but it is very difficult to eat quickly while driving.

We were totally exhausted by the time that we got to dad’s house and Dominica had to drive for the last hour or so.  There was a lot of construction on i390 and they made us drive north on the southbound side – but not with two way traffic, just converted to northbound traffic with the signs facing the wrong way.  We didn’t see a single vehicle traveling with us all the way from Dansville to Sonyea and it was very disconcerting.  We thought that we had gotten onto the wrong road or something.  But it turned out to just be weird and labeled poorly.