Dominica and I did not get to sleep in this morning as we had to be up and moving to get her to her dentist appointment first thing in the morning. She was scheduled to be the first appointment at the office so we had to be moving very early.

I needed to get some work done online before we could leave because I wanted to have some stuff downloaded to my laptop for while I was stuck in the waiting room at the dentist’s office. So I went down to the lobby and set up my laptop at the desk and did some quick online work. It is a good thing that I have a wireless laptop!

Luckily it wasn’t too hot out this morning and it was overcast and expected to rain so we were able to pack up Oreo and bring him with us. That saved us a bit of time and made him a lot happier.

We were able to get right in just after nine o’clock. I went next door to the little cafe there and got myself some coffee while Oreo hung out in the car. It was a good area of Kearny with plenty of parking which made the whole trip much easier.

I had managed to have gotten the stuff that I needed downloaded and I was totally productive while I was waiting at the dentist’s office. I really had needed to have gotten that work done so I was very relived when it was completed.

Min’s appointment went very quickly and she was done in under forty-five minutes. I didn’t even have a chance to finish drinking my coffee! But it was just the preliminary appointment. She needs to have a root canal done and they can’t schedule her until two this afternoon and she figured that that would be better than just sitting in the office for four hours hoping to be squeezed in since we live so close – just fifteen minutes away.

So at ten we drove back to 1180 and dropped off Oreo. Then we walked over to Food for Life just as it was beginning to rain to get ourselves some breakfast. I am supposed to be on an all liquid diet this week but too much has been going on and I need the break. Dominica got pancakes as they are soft and easy to chew and I got the AM Burrito. The rain really came down while we were eating but it was over before returned to the apartment. 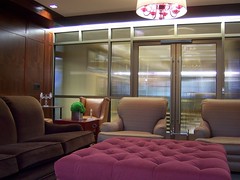 Dominica watched Bones and I went down to the 1180 lounge (aka “The Living Room”) so that I could hop onto the Spot On Wireless network there and get some work done. I managed to work for around two hours from the lounge and not be totally useless today. It was perfect timing as I was able to work during the time period when most of my office takes their lunch so I was able to help cover the time when there weren’t very many people in the office making me actually useful.

At one thirty it was time to back up Dominica and Oreo and to get back to Kearny for Min’s root canal. The whole thing ended up going extremely quickly and took only forty-five minutes from the time that we arrived until the procedure was completed. While Min was having the work done I took Oreo on a half hour walk through Kearny where we both got very overheated and we were sitting in the car with the air conditioning blasting when Min surprised us by calling to say that she was all done!

Dominica said that the root canal went very well and quickly and that she had almost no pain at all. She has several more appointments that she is going to have to go back for but this was the big one and everything else is very simple and she won’t need me to be there for them which is good as I am going to be out of town for almost a week coming up here at the end of this week and it would be a real problem if I needed to take her back. 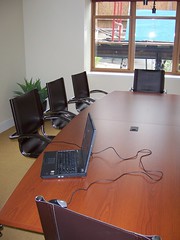 So it was just after three when we got back to 1180 for what we hoped would be the final trip of the day. Dominica settled back into the living room recliner to watch more Bones and I headed down to the second floor conference room to set up and really get some work done. It is really handy having an office and conference room down there with no one ever interested in using them.

It was hours before I saw anyone at all down there and even then it was some people who were working in the building and not residents looking to use the space! I am amazed at how little usage so many of the amenities get in a place like this.

By the time that the end of the day was rolling around I was very near exhausted. In addition to everything else that was going on today I have a throat / neck problem that seems to be gland related – most likely an allergic reaction to something that I ate today but I can’t be sure. It really affects me when I swallow anything.

Tomorrow morning I am on the early shift for real. I was supposed to be on it today but called one of my teammates yesterday to have him cover for me today. It is going to be a long week. And after going in early tomorrow I am only hoping that there will working Internet access when I return to Newark as Cablevision is scheduled to be there sometime after two or so in the afternoon although when I go to my account online it says that no maintenance is scheduled. Argh!

So, to say the least, today turned out to be an extremely interesting first day on the job for Dominica.  For those of you who do not follow along closely: today was the first day of Min’s new job up in Nutley.  Her last position wrapped up a week ago, she took a week off in between the two jobs to vacation with her family on Topsail Island, North Carolina and today she was expected to be starting at her new position!  The big upside to all of this is that her new job, which started today remember, has dental insurance!  We don’t know how that will work yet but that could be a big time money saver for us.

I worked down in the conference room until seven and decided to call it a night.  I can’t get online from the apartment so I am going to post early.  Hopefully being back in the office tomorrow I will have a chance to post more regularly.  Tomorrow is going to be crazy between doing the early shift, having a very critical two-thirty meeting just before I leave for the day and then coming home to deal with the Internet access again.