Recently I was asked to join the Kodak Disc Photo Pool on Flickr because of my images taken using a classic Kodak Disc film camera in the 1980s. I am the most prolific photographer in the pool. It is neat to see pictures taken by other people using that silly camera. 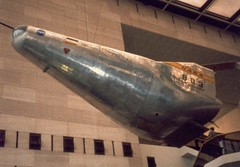 I actually have several pictures that were originally taken on disc film when I was quite young of which I am very proud. There is a certain quality to the pictures. Disc pictures have a tendency to look much older than they actually are because of the under-exposure and extreme graininess. But many of the images turned out very well. In fact the overall results were surprisingly good.

This particular image is of a NASA commissioned Northrop M2-F3 that hangs in the Smithsonian National Air and Space Museum in Washington, D.C.

I barely got any sleep last night. We went to bed on the early side but Oreo was very restless and kept waking me up throughout the night. So at no point did I get a chance to get a full sleep cycle in.

I am on the early shift this week so I was awake at five thirty and into the office just after six thirty. At least the drive in was uneventful other than needing to fill up on petrol. The car needs to go into the shop though. It topped one hundred thousand miles this past week and is showing its age. The gas tank appears to be beginning to leak and that has to be dealt with right away. And one of the headlights is out – again. This must be the tenth of so new headlight that we will be putting into this particular vehicle! And the car is starting to start pretty hard on hot and humid days.

I accidentally left my cell phone at the apartment today which is awful as today just is not a day when I can live without it. So my plan is to run back to the apartment over lunch and to pick it up then. Not exactly what I needed today but it will prove to give me a break from the office as I don’t normally take a lunch and since I am tired and have an interview this afternoon it might be good for me even though it is a tremendous pain.

Dominica starts her new job today. Officially she started yesterday but, as you know, that didn’t happen so today is her first day into the office and I am sure that they are extremely glad to see that she has arrived and will be able to talk on the phone just fine. Yesterday there was some fear that she would have some problems talking or would be heavily medicated and useless for troubleshooting. But, as it is, she is just on heavy ibuprofen and is fully functional.

This morning proved to be exceptionally slow at the office. My phone only range once on the entire early shift and I only received a single email! It feels like the Monday that I didn’t get to have yesterday. I needed that.

Dominica was finally able to email me to let me know that she was in the office and had gotten access to her email around ten in the morning. I am sure that it is going to be a very busy day for her.

I ran home during my lunch “break” and cleaned the apartment and got my cell phone just so that I would be able to answer it when Cablevision called about coming to fix my Internet access.  I shouldn’t need it at all because the concierge will orchestrate everything and have a porter let the technician into the apartment but just in case I figured that I should have it.  At least while I was home I was able to whip myself up a protein shake to get me through the day.

I got back to work just in time to spend the rest of my day filling out McDonaldsesque application paperwork for an internal interview.  It was embarassing to say the least (I was embarassed for them for being a fast-food-esque HR manager.)  The interview ended up going very badly and I am far less interested in the position than I was going in.  My real concern is with the company’s lack of perceived value in human assets.  They don’t seem to think very highly of their employees.  Like they are a low value commodity that they can just replace whenever they need – much like McDonald’s does.  Not the kind of environment to foster and happy career.

So I am feeling glum.  I was hopeful going in that this would be really positive but now I am concerned about the viability of the entire idea.  Originally the idea was that I would take the position if the offer was good enough but now I don’t feel that that decision is necessarily a smart one. I forgot what it is like to be an “employee” and how awful that can be.  How depressing to have your own performance not be a factor in your success or compensation.  To just be a commodity expected to be grateful for the opportunity to work.  😛

I got home just in time to deal with the Cablevision Internet access repair.  I could whine about all of the problems that I had with that as Cablevision had voluntarily turned off our Internet last week as a prank, I am told, internally to cause a tech to have to come out to our building but I just don’t have the energy.  So Cablevision is just getting a 😛 as well.  At least my Internet access is back on.

Dominica did some grocery shopping on her way home.  She was not super impressed with her first day of work today so she wasn’t all chipper either.  We were both feeling blue so we decided to just order in a pizza and eat some instant pudding.  We watched some Buck Rogers and decided to just call it a night.