I woke up this morning, on my own, around eight thirty. It was perfect timing since I had to go down and get the car parked in the garage instead of on the street this morning. So I got up and went down and put a little money in the meter and took a walk to see where we were in the city and get a feel for our location. 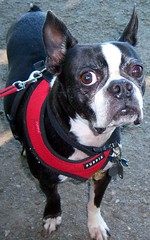 I came back to the hotel but Dominica and Oreo were both still fast asleep so I headed back out, got a garage spot and got the car parked. Then I went for another walk and stopped at the patisserie across the street and stocked up on some amazing pastries to bring back to Dominica for breakfast.

Breakfast was amazing. After eating we relaxed for a while and got ready to face the day. Then, around noon, we took Oreo out for a long walk (between three and five kilometers) up the av du Parc to Parc Mont Royal and took a long walk through the park. Then back to our hotel. Oreo had am amazing time and it was after two when we finally got back.

This walking trip gave us the very first opportunity to try out Dominica’s new Kodak V1003 camera that she just got this week. As soon as we got back from our walk Dominica and Oreo took a nap and sat down and transfered the first few pictures from our trip up to Flickr so that everyone can follow along with us. I have started using Google’s Picasa 2 photo editing software to make cropping and touching up a lot easier. I have used GIMP in the past and it is an amazing program but way too heavy for me. Picasa is very simple and fast for me to just pick up and use. So now I am starting to not post raw images to Flickr but edited images much more of the time. 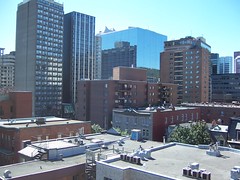 Dominica slept for about an hour and a half. Then we put Oreo in the car and headed out for a late lunch or early dinner.

We went to Asha but it was four thirty and they don’t open (ouvert) for dinner until five so we took a long walk around the block. While we were walking our friends coming up from Newark called from the customs line on I87 to let us know their status and to make some plans for this evening.

At five we got into Asha and had a great dinner. Dominica has been going crazy wanting Indian for days so this worked out really well. The price was really good too.

After dinner we came back to the hotel room and I took a nap this time and Dominica watched a French language program telling about the making of the Ferrari 612 Scaglietti. Now she wants one. I can’t believe of all the Ferraris that we always talk about – Ferraris being possibly the most beautifully sculpted pieces of serious engineering on the planet – that she picked out the one truly unattractive Ferrari made in the past three decades or more.

A little before nine, when we were supposed to meet our friends out at Bily Kun, we started out walking from the hotel. The bar is far enough away that it is a serious hike but not so far that we could justify not walking. So walk it we did. It took about forty-five minutes to go from our hotel to the bar. We didn’t walk quickly but took a nice, leisurely stroll through some really cool Montreal neighbourhoods along the way. We got up to the district a bit ahead of everyone else so we went to Cafe Noir and got some coffee while we were waiting.

We met everyone around ten and decided to look for a place to eat. We ended up eating at Lychee which was very nice and stayed open late for us which was awesome. After dinner a bunch of people were exhausted and a few weren’t feeling that well so six people, including Dominica, headed for home. Dominica was one of the four that traveled back via a cab. So she was home with Oreo just before midnight.

The four guys who were left went on to Bily Kun where our mission was to try real absinthe which is still unavailable in the United States even though it has been legalized almost everywhere else in the world.  We tried it, at $14 a drink, but we were not impressed.  It really tastes disgusting.  I can’t believe that people get excited about this.

The guys stayed out until the bar closed at three in the morning and then we took the long walk about to the hotels.  It was around four when I finally rolled into bed.