The weather has finally turned cooler. After a very warm week it is a welcome respite. Although it is very windy today. My walk to the office had quite a headwind. I grabbed a breakfast sandwich from Airlie Cafe on the way into the office. They don’t have a website or I would point you to it. I did a quick search for them but the top hit on Google for Airlie was, as you can probably guess, SGL. 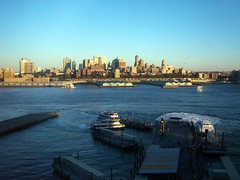 It was a typical Friday but my first one on Wall Street. I took some time to go through the building and find some of the people that I work with every day. It is a large building and I have a lot of clients and coworkers scattered throughout it. I also got a chance today to snag shots of a couple of the views from the office.

This particular view is not taken from my office but from a conference room just down the hall.  I have a nice view but nothing as nice or as wide open as this.  The real advantage to taking the picture from the conference room, though, is that there weren’t as many bright objects so close to the glass causing glare.  This is downtown Brooklyn taken from the corner of Wall Street and South Street in Manhattan.  That is the Wall St. Pier and the Wall St. Ferry in the foreground on the East River.

I worked a long day about eleven hours. This was my first time working quite late since starting on Wall Street. So far I have been coming in early and leaving at my usual time but since it is Friday I didn’t get to leave until after seven so it was dark out and the area was relatively devoid of business traffic. There was still a fair number of people on the street though and I am pleased to discover that my area of Manhattan does not become deserted late at night. So walking there is never an issue.

On my way west up Wall I actually ran into a friend who had left the company that I am currently with less than a year ago. We talked for fifteen minutes or so and caught up. It is funny that I ran into someone that I knew from work here on my very first week in Manhattan. I would never have expected that to have happened especially with as little time as I have had living in this area and how little tim I have been in the financial sector.

As I was walking home a friend who used to live in Eleven80 but who now lives in the Ironbound and her new roomate – who it turns out is someone that I know from Min and my last trip to Montreal – and they picked me up and drove me home. Turns out that Dominica had arranged for about six of us to meet and go out for dinner and they were on their way to Eleven80 to meet us. Good timing.

Four of us from Eleven80 and two people from the Ironbound (I am working hard not to print peoples’ names here, aren’t I?) walked over to Scully’s on Clinton which is a brand new Irish pub just one block from our apartment. We are very excited to have a new restaurant to be able to go to so close to home. One couple that was out with us said that this was their third time at Scully’s just this week (they only opened about five days ago.) We ran into two of our other neighbours there who said that this was their fourth time there! The place was so new that they are still on a partial menu and don’t even have their name posted outside anywhere.

The food was good. We had a really nice time hanging out with everyone. We were there from about eight until almost eleven in the evening. Then we all came back to Eleven80 and all of us but Min went to see the one couple’s apartment while Min went to check on Oreo. Then, while we were down there, everyone decided to just come up and to hang out in our apartment for the evening. So I called Min and she did some frantic cleaning while we were on our way up. She did an amazing job and the place actually looked pretty decent with just ten minutes of warning.

Two more friends from our building came up to the apartment and joined us so there were seven of us (after one took off) hanging out until around midnight or so. Maybe a little later. We had a really good time and, like always, Dominica wants to get everyone together more often – she always says this and then never wants to hang out with people later once she has forgetten how much she enjoys people!