Today is a lazy day for Dominica and I. We needed a chance to catch up on lost sleep and to just relax for a while. We slept in this morning and didn’t get up and moving until quite late. Not until almost eleven were we even thinking about heading out to face the day.

We tried doing a simple breakfast right across the street but no one was open so we decided to take a walk over and eat at the Central Ave. Diner that is not too far from Eleven80 here in Newark. Breakfast was good and simple.

I took a few pictures as we walked there and back because the weather and timing were great for capturing a couple of the buildings here in downtown Newark. I managed to get a good picture of the old “S. Klein on the Square” building which I believe is scheduled to be demolished to make way for a new highrise as part of the Newark renovation project. A little research online at Wikipedia turned up that the Newark department store closed its doors in 1976 and has been vacant ever since. It is a very large building. Hard to believe that no one can find anything good to do with it. 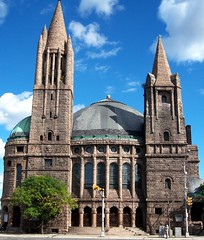 I also got a picture of the downtown Baptist Church located just north of Military Park on Broad Street’s east side right in the heart of the city’s commercial district. It has some amazing architecture and I hope that I can get some close ups of some of the more interesting features sometime when I have a tripod and the Nikon with me. Newark has a lot of old, interesting architecture from its heyday as the thriving heart of New Jersey. It is sad to see what has happened to the city in the past forty years.

After coming back to Eleven80, Dominica and I spent the afternoon snuggling with Oreo and watching a bunch of the second season of The Cosby Show. We decided that we really needed to just relax this afternoon. I did a little prep work for my Java homework that is due on Thursday while we watched the show but mostly just relaxed.

Around seven in the evening we decided to head out to the office in the living room and to get to work on some actually homework. I found out that John Nicklin is going to be coming into town in two days so we are hoping to get a chance to get to see him. I don’t think that we have had a chance to see the Nicklins at all since last Christmas! This year has just been crazy for Dominica and I. I know that we always say that but this year has truly been extra busy. Being so far away from friends and family really does take a toll on our ability to visit with people – even those like the Nicklins who are closer to us geographically now than before.