It is a rare Friday that has me working at home. Today I had to work at home because my office on Wall Street is being moved two floors down and into the middle of the building. No more awesome views for me. Since my office was being moved I had to work from home or else I would have just been standing around the office with no phone and no computer. As relaxing as that would be – kicking back with a good book and some coffee – it is Friday and the deployments are pretty critical today and I can’t just blow the day off. And getting to Warren, as we proved yesterday, is not possible on a Friday when late deployments don’t even start until after the last shuttle run has already taken the offsite workers home for the evening. 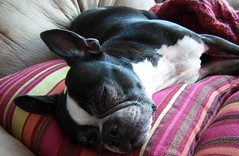 At least by working at home on a Friday, Oreo and I got a chance to sleep in much later than usual. I start work later on Fridays so that I can work late into the evening without hitting overtime – at least for an average day. Some days go really late regardless and I just can’t skew my schedule enough for that. But I don’t mind overtime so no big deal.

My day ended up being quite busy. I had hoped that it would be moderately slow allowing me to get some Java homework done but that didn’t happen at all. I was “rushed off my feet” all day. I was so busy and had so much work backing up on me that I actually didn’t get a chance to wrap up until ten thirty in the evening which is a thirteen hour day – without any lunch even! Boy was I exhausted.

I did manage to take a couple of pictures of Oreo while he was lounging about the apartment today. He was very lazy – Mr. Snuggles McLazybutt – and really enjoyed the bright sunlight that we were blessed with today. He was a happy dog and very much enjoyed getting to spend the extra day with me this week.

Dominica cooked again tonight – fried fish in the oven (this will become important tomorrow as you will see.)  The fish was excellent although I had very little time to enjoy it.  I was working like crazy all night.

Tomorrow I have to be up very early and work pretty much a full day.   So I was looking forward to getting to bed early tonight but no such luck.  I got to bed around eleven thirty – just an hour after finishing up my work for the office – but then at midnight or just a little after Oreo got me up to take him out.  Apparently it was an emergency.  So my night was interrupted.

While I was walking Oreo I noticed that our building, Eleven80, has had lights added to the top of it making it one of the brightest spots in Newark.  That will do wonders for its marketing visibility.  And it makes it a lot more attractive at night too.  Up until now it has just been a dark form looming in the Newark nighttime sky.  This is very attractive and I am quite pleased with the change.

Dominica found out that the work on the Prudential Center – new giant new downtown arena here in Newark – is under a lot of pressure to be completed in the next six days.  And because of the pressure there there is also a tremendous amount of pressure for Eleven80 to also be completed externally by the same date simply because of the grand opening down the street and all of the people that will make seeing Eleven80 for the first time as they pour into Newark to use the new venue just one and a half blocks away.  Rumor has it that the scaffolding surrounding our building for the last two years will finally be coming down.  That will make our apartment so much nicer.  I am really looking forward to that.