Today is the release of the One Laptop Per Child OLPC XO computer! Even with just two hours of sleep Dominica got me out of bed and made me head out to the computer at a quarter after six in the morning to place one of the very first orders for our very own XO. We are quite excited to get it and see the latest educational technology available. 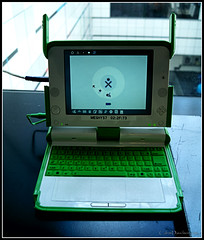 I placed the order and went straight back to bed. I felt like crap but it was nice to know that I had been able to place the order for the XO. We were concerned that they may have so much demand for them that they would stop offering them and we wanted to be sure that we would get one.

Vultures are the coolest.

Only four days until we head out to the UK. We are excited and yet there is just way too much to do before then. Eeek!

Dominica is hard at work attempting to find clothes for me to take on the trip. My big job today was to get a mobile phone that will work while we are in Europe. We use Verizon Wireless here in the US which is the big “non-GSM” wireless carrier which means that their phones are pretty much North American use only. So to have cell service in the UK we need to have a GSM phone. I called Verizon and their helpful sales people walked me through pricing and options for traveling with my Verizon phone.

What we decided was the best approach is to get me a new BlackBerry 8830 Global Phone that works both in the US and abroad throughout the world which, because I am a big Verizon customer with several lines and loads of options, came to just $199 USD after mail in rebates and instant rebate. I will have regular calling available to me while in the UK so people who need to reach me will still be able to although I will have some serious roaming fees so try to keep that to a minimum. I will, however, have unlimited email and web access so feel free to email us as we will be responding from the trains and buses and ferries and whatnot.

So my “old” Palm Treo 700p which was just updated and is now working is going to become Dominica’s new phone replaces her now aging LG flip-phone. She has been wanting a phone with email, full keyboard texting, web, etc. for a while and this lets us do that practically for free. We are switching to a family plan for the voice and will both have unlimited data plans (although she will not have either in the UK and we plan to just rent a phone for her while we are there.) All in all, after all of that jostling and changing and upgrading we are breaking even on the service costs and just spending $199 to get the new phone. Good deal. The phone is being overnighted so that we can get it set up and working tomorrow and have time to test it before actually traveling.

I was pretty under the weather when I got up this morning (I went back to sleep immediately after having ordered the XO.) I woke up with a horrible sinus infection. Just what I need. Although much better today than in a week while we are out of the country. I took a long shower which often helps and I tried to log in to the office from home but my VPN connection wouldn’t cooperate and my BlackBerry was dead so I was kind of stranded.

It was getting late so I decided that it would be better to get a nice, big breakfast with protein on the way in rather than go in and then stop again for lunch. So I stopped at Food for Life and had a breakfast sandwich and then went into the office.

I wasn’t all that productive today. Having a sinus infection makes the world very fuzzy. Although it was probably a very good day for it to happen as it is really a holiday and the markets are closed and only half of the company is in the office today at all and very little is going on. So the fact that I wasn’t the most productive person today wasn’t even noticeable.

I checked the stats for the site today and apparently people have been missing the podcast because the number of people coming to the site is quite high for a Monday. We are above average already and we aren’t even into our big evening crowd yet!

I got stuck a little later than I had planned at the office dealing with some late breaking stuff but it wasn’t too late. Dominica decided to make a run to the grocery store for supplies before going home so the timing was pretty good. She has to cook double batches of doggie food this week so that he has enough food to get him through all of next week too. Dominica is driving Oreo up to her parents’ house on Thursday night after work to drop him off and will spend the night there. She has Friday off from work so that she can drive home and spend the rest of the day getting all the last minute things prepared for our trip.

I am posting early and calling it a day. I am exhausted.