I slept for about ten hours and Dominica slept for about thirteen. We were up at eight this morning so we had just barely enough time to shower and to get downstairs to get our breakfasts. It was a vegetarian version of an English breakfast with toast, beans, scrambled eggs, yoghurt, juice, coffee and Linda McCartney sausage (a British made vegetarian sausage that is very good.) 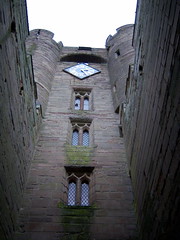 I did just a tiny bit of work for the office – most just making sure that everything was okay and cleaning up my email so that my BlackBerry would work again. Then we set off for town to begin our day.

Today was much cooler than yesterday and just as we were about to leave the inn it began to rain pretty steadily. We gave it a few minutes but there was no sign of it stopping so we decided that we had to head out into it anyway.

We started by taking a standard bus tour of town. I wasn’t able to get any pictures because of the rain. We never got off of the bus because of the weather. We were wet enough as it was. The bus just went around the village and to a few sights close to town. Any tour of Stratford-upon-Avon is just a tour of a handful of semi-significant William Shakespeare sights like his birthplace, his wife’s cottage, his mother’s farm and his daughter’s husband’s office. It is a strange collection of historic sites to have as a tourist attraction to be sure.

We were glad that we took the bus tour since we got to go to the “famous” sites since we were already here and we got an overview of the village. But it didn’t last very long and didn’t cover anything very exciting. After the tour we stopped into the Pen and Parchment which was right next to where we caught the tour bus and looked very inviting.

Lunch was excellent and we were very happy to discover that the Pen and Parchment had real ale (cask drawn) on draught. We both got cranberry and brie Wellington. It was awesome. The food here is really great.

After lunch we took the “city” bus over to the market town of Warwick where the famous Warwick Castle is located. This was the first time for either Dominica or I to ever take an “actual” bus that was not a tour bus. We are pretty sure that buses here in the UK are nothing like they are in the United States. In the US they are often scary. I would never want to venture onto a Newark city bus, for example. But here in England the buses are clean and pleasant and the drivers are helpful and you can pay with credit card and they can make change if they need to. It was a great experience. We didn’t feel like the bus was dirty or scary in the least. 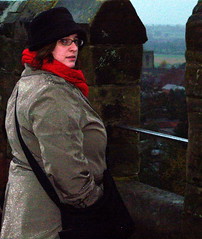 We got a nice view of the region around Warwickshire while on the bus. We got dropped off at the market in Warwick and from there we walked through town to the castle. We spent several hours doing the self-guided walking tour of the castle. It was incredibly dark from the overcast sky and it was raining lightly the whole time so we were very hard up for getting any pictures. I took what I could and got them uploaded to Flickr. Several of them are blurry but we didn’t have that many good shots and we wanted to have a good set of pics from the castle so we decided to leave them in the set.

We were getting really cold at the castle so we headed back into Warwick and caught the bus back to Stratford-upon-Avon. It was getting cold and damp quickly and we were really getting ready to get inside somewhere. We were very excited when we got picked up by one of the rare double decker buses and got to ride authentically in a real British double decker on the top deck in the front row. It was very cool. 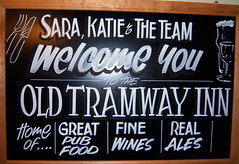 We decided to get dinner at the Old Tramway Pub which is located almost directly next to the inn where we are staying. We got there but found that they had just stopped serving dinner. It was just fifteen past five in the afternoon. They told us that pubs in Britain stop serving food on Sundays very early. So we had a couple of drinks to warm up and spent abut an hour hanging out with the locals before walking back into town to find some food at a regular restaurant.

We went to Thespians, an Indian and Bengali restaurant, on Sheep Street. I have never had an opportunity to have Bengali cuisine before so I went for the vegetarian recommendations of the house. The food was excellent. We really like the restaurant. While we were eating we noticed out of the window that the rain that had been coming down all day had turned to snow!

It was a cold walk home in the snow after having spent the whole day outside in the wind and the rain. We were pretty wet for most of the day and the weather was starting to get to us after having been out in it for so long.

We got back to the Avonpark House and settled in for the evening. Tomorrow morning we are eating breakfast here at the inn and then catching the train down to London.