Dominica and I got up early this morning so that we could get an early breakfast at the Avonpark House in Stratford-upon-Avon. Our vegetarian breakfast consists of scrambled eggs, baked beans, dry toast, Linda McCartney sausage, coffee, apple juice and yoghurt. Pretty healthy. 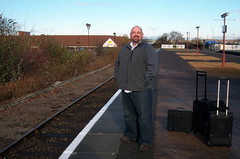 I worked from the Avonpark House for a little while before we headed out to catch the train. I wanted to make sure that the basics from the weekend were taken care of before being unable to connect to the office for a little while. I cleared out my email, took care of tickets and requests, got back to people from over the weekend, let people know where I was, etc. It took about two hours to get everything straightened out but at least everything was in line for the day.

We hired a Hackney Carriage to take us round to the train station where we caught the train bound for London. Unlike the train that we took coming northbound this southbound train stopped at all of the little tiny village stations along the route making it take much longer.

We got to Marylebone Station and walked from there to Baker Street where we were able to catch the London Underground which took us to Aldgate in City of London. From there we walked a ways south down to Prescott where we are staying near the Tower of London at the Sleep Inn City of London.

We were pretty exhausted by the time that we got to the hotel. We got checked in and situated then I had to head out to get to the office on Canary Wharf. I went to the desk but they really had no idea how to get there or how to get me information on how to get there. So pretty much I was left to my own devices. 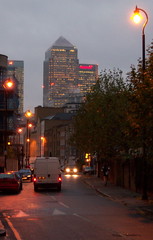 I decided that the distance wasn’t that far and the underground is confusing so I just walked. Oops. That took about an hour and a half (I had been hearing that it was just half an hour.) I was a good distance from the hotel when I caught my first glimpse of Canary Wharf and realized how far away it was. Later I was informed that the area that I walked through was very scary and it was amazing that I wasn’t mugged. But none of it felt in the least bit worrisome. It felt much safer than the good bits of Manhattan and those aren’t really scary either.

I wasn’t in the office for very long since most of the day had been spent traveling. It took a good hour or more in the office just to figure out how to get a working workstation for me. The company that I work for doesn’t have any system for employees working outside of their home region to have their desktop logins work. They take away web access, email, etc. so you can’t even get the basic tools necessary to tell someone that your login is broken. So I have to work as someone else and log in remotely to my workstation on Wall Street even to just check my mail or to lookup a telephone number.

After work two of my coworkers and I walked over to Henry Addinson on the Wharf for a pint of ale and then took the DLR over to Tower Gateway to meet Dominica and walk down to St. Katherine’s Wharf to look for dinner. We ended up settling on an Indian place called Mala which was very good.

After we got back to our hotel I logged in again and ended up having to work until one in the morning. I am going to be pretty tired tomorrow.

I tried to take pictures today and was able to get a few off but only just a few. It is so dark in London, both because of the weather but also because we are much farther north than we are used to being back home and the sun is very low and dim and sets extremely early compared to what we are used to. There is almost never any light here.