Today is Dominica and my last real day in London. I was up nice and early and off to the office early enough so that I arrived and had no one to let me in. It was a little before eight when I got to the office even after having missed three trains on the DLR simply because I wasn’t willing to be as rude and obnoxious as it apparently is required to be to catch a train in this town. In New York people do not shove you out of the way to get onto the train. Partially because in New York they run enough trains to handle the volume. And partially just because the culture does not let you be that aggressive getting onto a train. 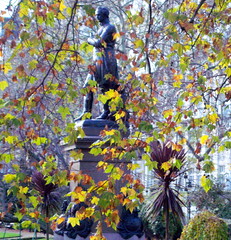 Dominica had gotten a buy one day, get one day free tour bus pass yesterday so she decided to take advantage of the free day of touring to continue taking bus tours of London. The sun was out today so she had an opportunity to get more pictures than she got yesterday. She also got a chance to take a walking tour of the Tower of London once she was done with the bus.

It worked out well that I got in so early, though, because I ended up being able to meet up with a friend for morning coffee in the company canteen whom I wouldn’t have had a chance to meet with otherwise. So that worked out well.

By the time that we were done with morning coffee there were people in the office to let me in. For some reason my badge would let me into the building but it wouldn’t let me onto the correct floors so I could get to the office and could see the desks but couldn’t get to them to sit down and actually work.

Today ended up being almost entirely meetings. Very little chance at all to sit down and actually use a workstation. And when I finally did have a chance to do that I kept getting locked out of the workstation that had the tools that I needed so I was effectively useless.

Before leaving the office I did get a chance to get a tour of the trading floor on Canary Wharf which is far nicer than the floor in Tribeca. After my tour one of my developers from the wharf and I went out to another bar on the wharf and got a drink before heading for home. We didn’t get very much time as I had to get back to Tower Gateway and pick up Dominica and get back to the wharf before it was too late to get food.

So I rushed back to the hotel using the Docklands Light Rail, picked up Dominica and we rushed back to Heron Quay via the DLR to meet a friend from the office at Nando’s. We had a really nice dinner and a good time hanging out. Nando’s had some really amazing food. Several people had told me that I really had to eat there so we were glad to have gotten the chance to before we left. And it was open until a relatively decent hour.

After dinner we came back to the hotel and got to sleep as soon as all of the early packing was done. Dominica had managed to pack up almost everything before I had picked her up so we were in pretty good shape.  Tomorrow we are off to Northern Ireland. Our original plans were to take a train through Wales and a ferry from Hollyhead to Dublin and then a train from Dublin to Belfast.  But Min got a great deal on tickets flying to Dublin and then taking the train up that will save us a lot of time so we decided to do that.