I ended up working until one in the morning yesterday. One of the downsides to work from the United Kingdom is that the normal work that I would be doing back home is shifted five hours later than it is here so people sort of expect me to be around at really insane hours. But so much work was backed up that I stayed up late getting things back on track. That made me very tired and made for a late “local” morning today. 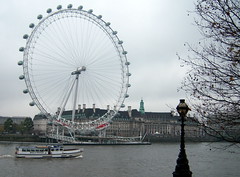 I slept in figuring that I would be more useful rested than groggy and then headed into the office in the late morning. I got in and was immediately swept off to a lunch meeting. The rest of my day was spent just going from meeting to meeting. There are so many people that I am here to meet that it is a bizarre schedule. I am doing almost none of my regular work in lieu of tonnes of alternative work. At least things are very interesting.

I worked until after seven. Dominica spent the day taking a bus tour while riding on the top of one of the double decker buses. It was cold and dark and really hard to get pictures but she did her best all bundled up riding on the top of the bus all by herself in the drizzle.  She took a lot of pictures and is planning to do more tomorrow.

After work I took the DLR (Docklands Light Rail) from Canary Wharf to Tower Gateway and walked to the Sleep Inn to meet Dominica. Now that I know how to use the DLR it is incredibly simple for me to get from the hotel to the office.  It turns out that this is a great location for us to be staying at because it is easy for me to go to work and easy for Dominica to go sight-seeing.  It was about eight when I got back. We walked back to the Minories Pub and got some dinner there. Fish and chips, of course. The two great meals of Britain: fish & chips and wellington pastries. 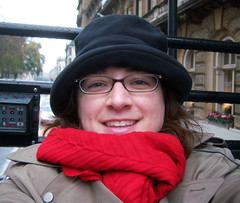 We were hoping to get dessert but the pub closed while we were eating and wouldn’t let us get the rest of our meals. This is one of the most obvious differences that we have been seeing between the UK and America. In the US restaurants normally stay open as long as there is a constant flow of customers. The certainly don’t stop serving food once they let you in the door. You can always safely finish the meal that you have started. In the UK the focus isn’t on the business but on getting home. So they close early, stop in the middle of your meal, never post hours, etc. Very strange to our way of thinking. We assume that if you are a business that you did it intentionally and it isn’t putting you out to attempt to buy something from you. Eating in London is like an imposition on the restaurant.

So our dinner was cut short. We walked back to the Sleep Inn just as their own restaurant stopped serving food. London must be the sleepiest town on the planet. I have never seen anyplace that shuts down so early. This is on par with Newark back home. The city only seems to exist as a place for people to grab lunch. They expect everyone to eat at home for dinner and go to bed after EastEnders.

The little bar at the hotel did have some snack foods prepackaged that they could sell us so we made due with those and some coffee. Then it was up to the hotel room where I did just a little more office work and then off to bed.