Today is back to normal for me and it is the last day of Dominica’s vacation. We got up a little late but managed to make up the sleep that we were missing. So I jumped out of bed and went right to work. Dominica got up just a little later and we got breakfast together at Airlie Cafe before she drove north to go get Oreo. 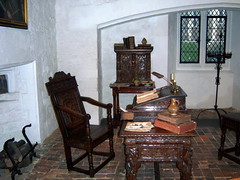 Today is foggy and misty here in Newark, New Jersey. Surprisingly it is much warmer than Belfast and a little warmer than London but otherwise the weather is about the same. Not quite what I was expecting to return home to.

It was an expectantly busy day for me. I have a ton of catching up to do after having been out of the office for an entire week and from having so many of my coworkers on vacation. It is all that I can do to keep up with everything. But this is no surprise. This is the price that you pay for going to Europe for a week and a half.

Other than work, nothing really happened today. Dominica met her parents with Oreo just north of the Catskill Mountain on Interstate 81. They had lunch at a diner there where they had a really good vegetarian menu, she tells me, and swapped Oreo over. Oreo was very excited to see Dominica but went to the car to see if I was there too.

Dominica and Oreo got back between two and three in the afternoon. Oreo was very excited to be home and rubbed his belly on every piece of carpeting that he could find starting at the front door of Eleven80. He is so goofy. He is a little itchy from having been around grass for ten days. His allergy is pretty acute.

I worked until almost seven and then we watched a few episodes of Ballykissangel. We have finished the fourth season and are now working our way through the fifth season. Oreo was very happy that we were just laying in bed and relaxing. He snuggled and slept.

Amazon’s new Kindle eBook device is shipping in just a few weeks and looks to be very interesting. At $400 it isn’t cheap but this is the first book reader of its kind and promises to be groundbreaking. The screen is said to be epaper – looking and reading like actual paper which means lower eyestrain that traditional electronic reading devices. And instead of hooking to your computer or connecting over your WiFi or whatever the Kindle comes with its very own, free, EvDO service allowing it to get new content from almost anywhere in the United States and Canada via the cellphone service. A very interesting concept indeed. I am looking forward to seeing how this product pans out for Amazon. The potential is definitely there.

Dominica went to bed a little before ten and I went back to work until nearly one in the morning. There is a lot to do at the office and I have a lot of catching up to do. We are in the “crunch” leading up to early December that is felt throughout the financial industry. Late December is very slow but leading up to it is a mad rush to get things done. And with so many people on vacation there is just no way to get enough done during the normal hours. So here I am working all night.

Oreo missed me and came out to the living room to sit on the futon beside me while I worked. He has definitely missed being home.