Today was another busy day for me. Still lots of work to do to get caught up from Dominica and my trip abroad. I started work at seven this morning to give myself a bit of a chance to get the ball rolling before most people come into the office and start piling up new requests. 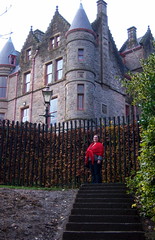 Today is Dominica’s first day back in the office for a week and a half. She took seven days off giving her a total of eleven days since the last time that she was in the office. That is enough to start to forget how to do your job! She had to really think to figure out what time she had to go in to the office this morning.

Oreo was definitely ready to go to daycare today. He hasn’t had a chance to burn off his energy in a while and is raring to go. Dominica said that when she got him to Doggie Paradise that he lept from the car and was wagging his entire body when he saw his “second family” up in Wallington. He is very excited to be back to his regular, happy routine. He doesn’t like going without his play time.

Today was a very pleasant day. It started off heavily overcast but the sun was out and burned off the clouds and it was a bright and sunny day after that. I walked over to Food for Life for a late breakfast. I haven’t had that in two weeks.

It was busy enough today that I skipped lunch since my breakfast was on the late side. I figured that it would just be better to wait for Dominica to come home.

It is strange to be here on the coast with our nice, calm, warm weather – the apartment is holding 68° without any heating devices turned on – and to realize that dad’s house near Rochester, New York, is getting pounded with a serious blizzard including white outs and driving, horizontal snow! It is a different world between here and there. Just as different as it is from here to England, in fact. Actually, I think that weather in the United Kingdom is more similar to the weather here in New Jersey than either is to the weather back home.

I managed to upload the rest of the pictures from the UK today. Be sure to check out our Flickr UK 2007 set to see all of the images. There are one hundred and seventy three of them. The images uploaded today include most of Dominica’s second day touring London by double decker bus which was the sunny day as well as her tour of the Tower of London. They also include the pictures from our tour of Belfast on Saturday morning including a few of Belfast Castle and Belfast Cathedral.

I did some research today and Windsor House is the current tallest building in all of Ireland and stands at just twenty-three floors. That is twelve floors less than the apartment that I live in now. Although there is another skyscraper being built in Belfast and three more in Dublin that are supposed to overtake Windsor House it will be surprising if Ireland has anything as tall as the 1930 structure at which I reside for a very long time. We did get to see Obel Tower under construction while we were in Belfast. When it is completed it will have only half as many apartments as Eleven80.

Dominica got home with Oreo at six thirty.  We couldn’t decide what we wanted for dinner but finally settled on Nino’s.  We actually were both in the mood for McDonald’s which we haven’t done for dinner even once in the fourteen months that we have been living just up the street from one.  Walking to McDonald’s is as easy as walking to Food for Life or Airlie Cafe almost.  It is really that close.  But we never, ever bother.  It isn’t a very nice McDonald’s and they don’t take credit cards.  That is why we couldn’t go there tonight.  The cash situation is a bit tight after the trip to the UK.

So our evening is Italian take-away, some Ballykissangel and more late night work for me as I keep attempting to get caught up at the office.