Today is Diwali, the Indian Festival of Lights.

Don’t forget that your chance to buy an OLPC XO for yourself while donating one to a needy child in the developing world begins on Monday at six in the morning. The donation is $400USD and half of that amount is tax deductible. Additionally, T-Mobile is providing free access to their network of hotspots for one year for free to donors.

It was quite cold last night but by this morning it had warmed up considerably and I overdressed for my walk to work. I was pretty warm by the time that I had arrived.

It is one week until Dominica and I hop the pond to spend a week and a half in the British Isles. But most everything is ready at this point so we just need to wait it out and soon enough, we will be there.

My morning was incredibly busy and then for lunch I sneaked away with two of my clients for a nice sushi lunch. I am glad that I was able to – my day was really busy and I needed the break. 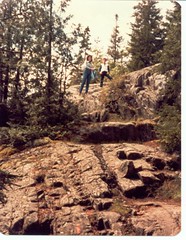 My afternoon, as it often is on Fridays, was completely jam-packed with work. It is days like today when I really earn my paycheck. I didn’t have time for anything all afternoon. I worked as fast as I could solidly from about two thirty until nine in the evening. It was a really late night and I was burned out by the time that I was done. I was really productive though and just a ton of work was accomplished during that stretch.

It was so late by the time that I was wrapping up at the office that Dominica just went ahead and had dinner at home with Oreo. After work I walked up to Suspenders, the pub on Broadway at the head of Wall Street, and had a fish fry alone. When I left the office on lower Wall I was surprised to find that the day had turned cold and that it was raining.

It seemed oddly appropriate to me to be spending the forth anniversary of the passing of my mother sitting alone in the middle of the deserted financial district in the cold rain eating a fish fry. It gave me a little quite time to myself at least.

Dad emailed me a link to the blog of a friend of ours and my mom’s accordion student. She blogged about mom yesterday on The King’s Ranch and it was really touching. I am being intentionally ambiguous so ignore the poor writing.