We were really exhausted this morning trying to get up and go to work after the all evening Halloween party at Eleven80 last night. Oreo won his doggie costume contest last night and he has another one at daycare today. So he is all psyched up and ready. 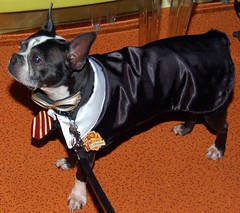 Oreo ended up winning best overall costume at Doggie Paradise today.  He worked really hard for it.  He has won a lot of doggie goodies this week.

I am working in Warren, NJ today so I had to get up and go up to Tribeca to catch the shuttle. I got up at five and got in as quickly as I could but just missed the first shuttle of the day. Or at least I believe that I did. Perhaps the one that I got at eight was actually the first shuttle. I have heard rumors about the bad ride that you can get depending on which shuttle you end up with. Well today I got the bad one.

The bumps on the road were so hard that it literally knocked the wind out of me over and over again. I felt like I was going to pass out. There was a smell of fuel on the bus too so if you got a chance to take a deep breath it burned. The bus was hitting the ground so hard that I could see as much as a half inch of light between the window and the window frame when the side of the bus flexed. You could easily lose a finger in there.

I was exhausted and ill when I got out to Warren. That was not a good way to start the day.

Luckily for me this evening the shuttle to Tribeca was running very late but the shuttle to Summit was there. I have been wanting to try the Summit shuttle but since I didn’t know how to get it I never took the chance on it. But I had plenty of time to talk to the driver and learn how it works so I took a chance on it and that ended up being both a much more comfortable ride and a far faster one. From Summit I can just catch the NJ Transit in to Newark’s Broad Street station and walk home from there. It was seven when I got home.

For dinner tonight we had leftovers from Dominica’s International Food Day at her office. She had BBQ Tofu that she had made and some delicious pirogies that one of her coworkers had made. It was a really delicious dinner but there wasn’t enough of it.

My Tandy Radio Shack TRS-80 PC1 pocket computer arrived in the post today. Dominica even thought that this one was pretty cool.

The Flickr site now has the Pictures from the Eleven80 Halloween Party 2007. The Nikon D50 DSLR with the big SB-600 speedlight really turned out some amazing shots. You would never know that the party was held in a room lit almost exclusively by black lights. I can see the people so much more clearly in the pictures that I could when I was there.