November is already here but if you walk outside you would never know it. Today is so warm that a jacket is only barely a recommendation and definitely optional. I took Oreo out for his morning walk and couldn’t believe that it was past mid-September. And it wasn’t even all that bright today either. 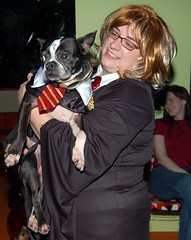 Oreo and I slept in this morning as it is my work from home day and I don’t have to travel anywhere (or even take a shower before work.) We really needed the chance to catch up on some sleep.

This morning Eleven80 took down most of the scaffolding that was located on the Raymond Boulevard side of the building. When I took Oreo out for a walk in Military Park we were surprised to be greeted by the sky and open air instead of the scaffolding looming overhead. We have been here for over a year and have gotten used to having the scaffolding in place. We had forgotten that someday it would be gone. What a difference it makes. The building is much more attractive now.

Dominica’s new Apple iPod Nano came today. It is very pink. She is excited. We are thinking about getting a new iPod Nano for me too for when I am commuting. But not a pink one.

We ordered in Italian from Nino’s tonight and I got stuck working until almost ten in the evening.  Min went grocery shopping on her way home so she got home late and found me in a conference call still for about half an hour yet.  It was a very late night for me.

We finished watching the second season of Family Ties and went to bed early.  We are all very exhausted.  We didn’t even get a chance to fire up the iPod yet.