Yesterday was a great day of bright sunshine which is exactly what our poor rose bush (or “Sled” as Dominica has named it in a perverse twist on a joke from Citizen Kane) needed. I put it into the windowsill all day and it really seemed to make a difference. With the additional the Miracle Grow and extra potting soil to buffer against dryness recovery would appear to be within its grasp. Today is bright and sunny again as well. The Lord wants our rose bush to recover. So back to the windowsill it goes. At night I take it away and put it by the sink for warmth as the window’s ledge becomes quite cold without the sunlight. Today I can see real progress happening and new leaves shooting out to replace the dead that had to be cut away on Sunday night. Overall I can now say that it is looking sehr gut. 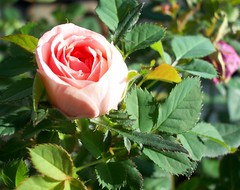 This picture was taken about a week ago before our rose bush was hit with “the drought”. It was quite healthy and had several blooms. Now it is thin and has no flowers at all. I expect that it will be quite some time before it attempts to actually have a rose blossom again. Things have been going so well this week, however, that Dominica has decided to hit Home Depot today and see what new plants she can convince to follow her home.

I decided that I really needed to do some serious apartment cleaning today. I can only handle so much mess before it drives me insane. So I started tearing the place apart today so that I could clean up a bit of the mess that has accumulated. I even cleaned off Dominica’s desk and disinfected it. Her desk is like our apartment’s equivalent to Genoese rats.

We recently discovered, through some advertising with Netflix, that HBO is producing a “epic seven part mini-series” based on the incredible book “John Adams” by David McCullough. The series will be starring Paul Giamatti who is a truly incredible actor. I am really excited and can’t wait for the series to be made available. The two part premiere will be this Sunday, March 16th, at eight o’clock in the evening for those with access to HBO.

My plans for the week changed and I am going to be working from home tomorrow covering the early shift (starting at six thirty in the morning) and I will be going out to Warren, New Jersey on Thursday instead of going out tomorrow. We can’t do our Dungeons and Dragons group tonight anyway because of other conflicts so it worked out well that I wouldn’t really be able to do it tonight anyway.

Dominica came home with two palm trees and some potted ivy. We put one palm behind the recliner in the living room by the northern most window. The other palm we decided to actually put into the living room window directly above the heater. It was too short to put onto the floor so the windowsill was about the only option. The ivy is going to hang in the living room but the hook that we have is too short so Dominica is planning to find a longer one tomorrow.

I realized today that my two HP dx5150 Small Form Factor desktops are designed to be stacked with rubberized feet that fit into convenient troughs in the lids. So instead of having two desktop units taking up space I just stacked one on top of the other behind my monitors and now my desk looks much better and has quite a bit more space. By putting all of the cabling into one single location it makes it a lot easier to get at stuff too. I can’t believe that I hadn’t thought of this previously. It is strange that HP decided to design these units in this way as I imagine that the number of people who actually stack them is relatively few. But if you need multiple desktop units for some reason (for testing or for multiple operating systems like me, for example) then these are definitely the units to have.

We ordered in dinner from Nino’s. I had planned to order dinner so that it would arrive shortly after Dominica got home but I ended up being stuck on a conference call for the office until almost seven. So not only did I not get to order the food but couldn’t help her to unload the Mazda either and Ralph, our doorman, had to help her move everything up to the apartment.

We spent the evening watching the Bollywood classic Hum Tum from 2004. It was very good and we both really enjoyed it. We had borrowed the DVD from a coworker of Dominica’s. It was a really long movie though – approaching two and a half hours. So it took up the entire evening.

Dominica played a little MySims and then went to bed. Oreo was exhausted as well. He just slept and slept all evening.

I returned to the living room to keep working on the mess that I had made while cleaning. I tore out all of our networking so that I could move all of the equipment from the wire-frame printer stand to the far side of my desk where it will be easier to access and will definitely look a lot better. I am also taking the opportunity to put the Apple AirPort Extreme into the network. The AirPort is now my “main” router connecting directly to the Internet and providing my wireless to the apartment. The Netgear FVG318 then sits behind that. I am hoping that it doesn’t have any problem passing the IPSec firewall through the AirPort.

I decided to do some more work on the FVG318 now that I have the AirPort in place in case anything goes wrong. When you do as much networking as I do it is vitally important to always have everything be redundant especially your workstation and networking hardware. I used to have a redundant Internet connection and I really appreciated that when I had it. My current Cablevision Internet access is good enough that I am not concerned about having a second line but it is something that I would definitely do again if my connection was any less stable.

The unit that I am working on now has been flaky for over a year but has mostly continued to function. The wireless functionality had always been nearly useless because it was so unstable. But I used wireless so rarely that I didn’t worry about it. But recently with the addition of the Nintendo Wii, AppleTV and my Linksys WiFi phone I felt that I really needed it to work reliably. So I checked and there were several firmware updates since I had last updated and the last version had “fixed” the firmware crashing issue. So I went ahead and updated to the very latest version. Now there is no wireless at all and many features of the administration screen are completely broken. It is in really sorry shape now. The setup wizard doesn’t even work properly and the “test” light on the front of the unit flashes forever no matter how many times I reset and try every possible setting. The unit works, more or less, but is leaning heavily towards the “less”. I am definitely not very happy with this particular model nor Netgear’s support of it.