I went to bed at a reasonable time last night but Oreo got me up to walk him at eleven thirty and then again at one thirty in the morning. Once you do that twice you tend to me rather awake. So I didn’t fall asleep again until two thirty or maybe even three making for a rather short night – the second in a row. So I was pretty tired when I got up this morning for the early morning shift at work.

I am working from home today which is quite the blessing or I would have gotten no sleep at all as I have to get up more than an hour earlier when going in to the office and even then it is a mad rush to get in there. My workstation at the office got damaged yesterday and Microsoft Outlook is not functioning which leaves me rather crippled when in the office but I have all of my faculties when working from home (all of my email faculties at least.)

Oreo is happy to be home today. He really needed daycare yesterday after his long weekend. He gets so bored when he is just in the apartment for an extended period of time. Daycare is so good for him. It gives him a much better life. But after a day of daycare he is always ready to sleep all day if he is allowed to do so. He will have only two more days of daycare before another long weekend since Friday is Good Friday which is a holiday for me and Dominica took a vacation day so that we could spend it together. 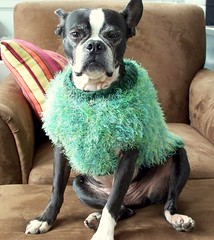 The sunrise was really beautiful this morning. People often wonder why we chose to live in Newark but the sunrises over Manhattan are awfully convincing. As we leave winter the sun sneaks out from behind Seton Hall Law School (off camera to the right in this picture) and works its way northward over Manhattan starting from downtown where it is today and heading up towards Harlem. All spring the sunrises just get better and better. I was not well prepared to capture the sunrise this morning but I will try to get some decent images of it as the year progresses. Our windows are really dirty right now which does not help and I am not mastered any sort of focusing with my new Kodak digicam so I probably need to switch to my good Nikon for this type of thing. I did manage to get a high def video of the sunrise on my digicam which turned out better than the picture did, I think. From Vimeo’s page you can view the video (standard or high def) or you can download the h.264 file directly so that you can watch it in QuickTime, MPlayer or VLC. Manhattan Sunrise from Eleven80. If you can’t reach Vimeo you can also get a lower quality version from YouTube.

I managed to do an install of DocuWiki last night while playing Settlers with Dominica. I have been interested in getting it set up for a while and am glad to see it now working. I have a ways to go yet as I would like to get it to attach to Active Directory for authentication. That would be really cool.

Dad reinstalled Mac OS X on the Mac Mini this morning so that he could start with a fresh system (and so that we could remember what the system passwords were as it has been three years since the unit has been used.)

I have a question, why do we call people who pose for a living, models? It isn’t like they are prototypes. I think someone was confused about the term model somewhere along the line. I suppose it is because calling them posers wasn’t as flattering as they had hoped. I suggest that we start calling people who pose professionally posers and see if it is still considered glamorous. That would make people who want to become models someday “wanna-be posers” and people who pretend to be models “poser posers.”

It was a very busy day of work today and it carried me through until six thirty or so after Dominica got home.  We ordered in dinner from Domino’s and watched one episode of Doctor Who that we have on DVD from Netflix (the 2006 season.)  Then Min took her laptop into the bedroom and worked on homework while watched some of The Gilmore Girls.  I talked to Andy a bit who has been out of contact with the outside world for the last two weeks as his Internet connection (over which his phone is transported) from Frontier Telephone has been down.  For his Internet to be down for an entire week is pretty ridiculous especially when you consider the incredible price that he has been paying for it.  He figured out that he can switch to Time-Warner’s Road Runner service and get cable television thrown in all for less than he was paying for nothing but DSL Internet access from Frontier.  In addition to the fact that Road Runner keeps enhancing its service while Frontier’s continues to deteriorate just makes the equation pretty simple to solve.