I was up bright and early this morning to get in to the office for the early morning coverage. My broken desktop was repaired after hours yesterday so that I can return to Wall Street and get some actual work done today. I talked to the desktop administrators and they locked down my desktop so that no one else can log into it now which will, hopefully, prevent these breakages from occurring in the future. They identified the problem that I have been having and it turns out to simply be that Microsoft Office doesn’t support multiple users with different versions of MS Office on the same workstation and so anytime someone used my desktop, even just for a second, the login process would attempt to load their copy of MS Office and break the whole system permanently. Now why Microsoft allows the accounts to interact this way I have no idea. Anything pertaining to Microsoft Office should be stored at the account level and should never be accidentally broken by a non-administrative user simply logging in. OpenOffice would not have this issue, I guarantee it. The worst part is that the only significant piece broken is Outlook but since we use that for all communications it is a pretty catastrophic bug to work around.

It is cool and rainy this morning. Not a heavy rain but a slow sprinkling. Heavier than a drizzle but not a solid rain by any stretch.

I was out the door and partway to the train station when I got hit with a tummy-ache and had to run back to the apartment. Not a great start to the day. So I decided that I had better do my early morning coverage from home and travel in once there were other people in the office. There is no benefit to me being in the office so there isn’t any business impact to me being home. Just annoying to get up early, get all ready and get part-way there to just turn around and go back home. Not the best use of my time. I really need to get into the office to meet with some people sometime this week, though, so I am definitely going in today anyway. I have missed two days worth of opportunities already.

The morning was slow and quiet. Maybe it is the rain. It is that grey, foggy, rainy kind of morning that lends itself to quiet reflection and slow walks. 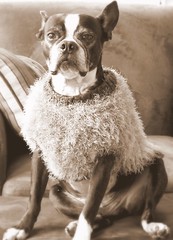 The sepia toned picture of Oreo that I did yesterday has been quite popular. Dominica has decided that she wants to get a print made of it so that we can put it on the apartment wall. I don’t normal use any sort of filtering or effects on my images other than some basic light and colour balancing but Oreo’s pose just seemed so perfect like he was posing for one of those long exposure shots like from the old west that I had to do it. I really like how it turned out.

Oreo was so good having his picture taken. Normally the moment you take out a camera he walks up to you and gets too close to be able to take his picture. But some friends in Northern Ireland wanted to see pictures of him in his green Saint Patrick’s Day jumper that I told him to get up onto our Ottoman in the living room and let me take his picture. I just told him to sit and stay and he just sat there being the best little dog ever. He posed for me and didn’t move at all.

I was going through Glenda’s Flickr feed this morning and came across this picture of the Citigroup Tower on Canary Wharf, Isle of Dogs, London that I really like so I am adding it here as well.

Glenda also managed to get a picture of the view from the twenty-fourth floor of Citigroup Tower as the weather was apparently a tad more clear when she was in London than when I was. Hopefully the next time that I am in London I will get a chance to get some good pictures.

I managed to escape the office and have lunch with Katie today.  Katie works down here in downtown Manhattan with me a few blocks to the south at the bottom of Water Street.  It is less than five minutes on foot between our offices.

We went out and got food from my falafel guys who are now back from their vacation which left me without good, cheap food at the office for the past two weeks.  It was raining today but had mostly stopped by the time that we took our late lunch at almost two in the afternoon so we walked over to the pier and ate on the East River watching the boats go by in the mist.  It felt a lot like London today.  We also got smoothies before heading back to work although it was pretty cold out for frozen drinks.

My day was pretty busy.  I tried to escape a little after four so that I could switch to working from home in time for my evening work (there is often a gap in scheduled work for about an hour after four in the afternoon until five or five thirty) but got stuck late and didn’t manage to get on the road until a quarter until five which meant that I didn’t make it home before people were wondering what had happened to me.

My days are really getting painfully long as my Middle East and European clients, who are my primary clients, would like me online around three or four in the morning (while on daylight savings time – another hour earlier during the winter months) and pretty much expect me to be totally available by seven while my Manhattan clients regularly want me working until eight or nine at night!  This isn’t holdem poker downloadpoker americanoomaha h lpoker per pc gratispoker gratis multiplayerpoker multiplayertexas holdem no limitsexy poker onlineparty poker bonuslive poker tourgratis giocare a poker onlinetexas holdem calculatempoker in tourdraw poker goldstanza pokerpoker on line italiacalifornia pokertornei texas holdemstrip poker gratistorneo poker gratisgiochi carte poker7 card stud gratisil pokerstrategie texas holdemtexas holdem online,giocare texas holdem online,texas holdem poker onlinegame pokerstreet poker onlineil gioco della roulettegiochi black jack in lineacasino bonus senza depositoclub player casinowww casino netcasino online mobilevideo poker strategycasino online itmetodo roulettescaricare casino gratiscasino on line gratis,casino italiani on line,casino on linewww giochi casino,giochi casino,giochi di casinocasino online con bonusplay baccaratmigliori casino onlineroulette systemsvirtual gamblingeuropa casino onlinecasino on line roulettecasino en lignevideo poker gratuitoroulette da scaricare gratisgiochi di casino gratis an occasional occurrence but has become quite the norm.  The work in the evenings is generally light but I am expected to be sitting at my workstation or at least have it ready and be on my BlackBerry and at home or the office for a period of thirteen or fourteen hours every day.  And then I have scheduled work more weekends almost always starting early in the morning so that I can’t rest up on Saturday morning and extending into the afternoon.

It is getting to be a bit much.  The worst part is that because I am expected to be available over such a large period of time there really isn’t any time when it is okay for me to be commuting.  If I commute early then I am not available when there is no other coverage.  If I commute late when there is alternate coverage then I am unavailable during high-profile time periods.  The same problem happens in the evenings.  I can’t return home because so many different teams have so many unrelated schedules that there is just no way to coordinate between them.

My new chair arrived from Staples today.  They were out of them in the store on Monday when Dominica went to look for one so we had it shipped.  I am not sure how the overall policy works but at least when you go to the store and buy the chair and then have it shipped the shipping is free.  So that was a pretty good deal.

I ordered dinner in from Golden City and Dominica put the chair together while I wrapped up some work for the office that needed to be completed right away.  We decided to take it easy tonight and get to bed early.  So we just watched the last two episodes of Doctor Who that we had from Netflix, walked Oreo, posted the DVD back to Netflix and went to bed.  While in bed we watched the final episode of season one of A Different World.

It is sad to watch the first season of A Different World and to realize what a great show it was and all that they could do with it when you know that most of the cast took off after the first season and really changed the show.  There was some really good character development going on and you could really see the show going in a good direction.  The continued to be good, from what I remember so many years later, but it wasn’t the show that the writers and producers had originally intended for it to have been.

Tomorrow I will be in the office on Wall Street and in the evening Dominica and I are off to see My Fair Lady at NJPAC.  We are very excited about having a holiday together on Friday.