My first project this morning is moving from Firefox2 (2.0.0.12) to the very latest Firefox3 (FF3 Beta4.) I had heard some rumours that Firefox 3 was really going to be amazing and so I decided that I should try it out, get a sneak preview and maybe help out with some Beta testing. So far I can say – Wow! FF3 is screaming fast. You can really feel it. It loads faster, scrolls smoother, reacts better and loads pages faster. And all fast enough that you can feel the difference! And I am told that it uses less system memory although that is tough to determine without some serious work which I am not going to do for myself. But so far in my first hours or working with it I am extremely impressed and will be sticking with it. Opera, Safari and IE seem to have lost some significant ground with this release. 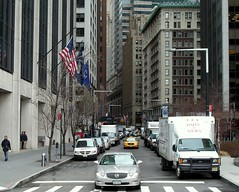 Today is the final day of my early morning week. It was a little warm as I walked into the office today. But not bad. I got in nice and early but can’t stay late today because Dominica and I are going to NJPAC this evening. We don’t have time to go out to dinner before the show, though, so we will just be doing something simple and quick. I might grab dinner on my way home if the timing works out well.

I was going through the list of search terms used to find SGL today and this has to be the best one ever – and to make it even funnier, more than one person arrived at Sheep Guarding Llama through this exact phrase: i watched the great mouse this morning it was awesome. What? I can’t even find SGL when looking for it using that term on Google. Some people must be pretty serious about their searching on that term.

Almost as funny is how consistent it is that people find SGL when searching for Cannibal Cuisine. On Google we are a bit hard to find but on Yahoo we are the very top hit for that term. This stuff is endlessly entertaining to me.

For a change I actually brought my camera down to Wall Street with me and took a few pictures. It is overcast and exceptionally dark today so we will see how many I manage to get. I took it with me when I stepped outside for breakfast and I tried to grab a few shots off of the pier but there wasn’t much to get with it so incredibly dark. I should bring the Nikon down and get some real pics one of these days.

Normally my morning seem to fly by but today the day really dragged on. It seemed like forever before we reached lunch time even though I had plenty of work to do. For lunch I just ran over to my Halal falafel guys and had my usual falafel pita sandwich and fries. I just ate at my desk. It was very lonely.

Luckily the market is closing early today because of the holiday weekend so all of the work that usually takes place late in the evening on the “weed end” night is happening on the early side around three in the afternoon. So hopefully I won’t be stuck late tonight as that will be a problem since we have to get to the theatre. 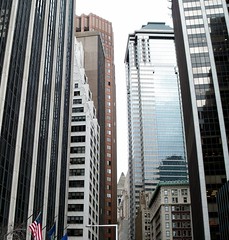 I stayed later in the office than I had planned but only until five which wasn’t bad at all. I stopped at the Metro Cafe in the Gateway Center on the way home and picked up sandwiches for dinner. I got home just minutes after Dominica and Oreo.

We ate dinner and watched the “lost episode” of A Different World. Although after having watched it I have to wonder if it was really a lost episode or if it was just left on the cutting room floor because it was total crap. What a horrible episode.

Then it was off to NJPAC to see My Fair Lady. The show was excellent but, as always, the show was plagued with the issues inherent in having a show in Newark. Tons of people’s seats were given away and were forced to sit in other locations than the seats that they paid for and families were separated because of the NJPAC not honoring their tickets. It was not as bad as at the last show that we went to but the attitude of NJPAC is atrocious towards their paying customers acting as if “squatters” who may not even have paid for the show have more rights than the seat owners do. Newark’s “entitlement” attitude even extends to the theater where they attempt to act classy – but it is a shallow facade. And then to have extremely loud commentary coming from people everywhere including comments about how amazing the scenery is at volume louder than a full normal voice! As if people are trying to make their commentary to strangers several rows away. Although, I suppose, maybe they had to shout to speak to the person who had the ticket to the seat directly next to them since they might have been forced to sit just anywhere. There was also quite a bit of “singing along” coming from all over. Going to a show in Newark really feels like you are with a group of people who have never even learned how to behave in a movie theater let alone a real theater.

We came home and went right off to bed. We have to get up and pack the car tomorrow and hit the road for Frankfort in the morning.

Six new images from Wall Street have been uploaded to Flickr. I did not manage to get any pictures later in the day, unfortunately.