Today is my work from home day but there is no sunlight today for little Oreo so he is stuck just hanging out in the living room on his pillow. He is not so happy about that. He loves his sunlight days. But he was sleepy and so it didn’t matter so much. He just slept the day away. 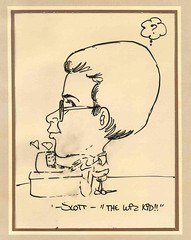 I am pretty tired today but getting to stay home and work all day without worrying about traveling helps. I started work at six thirty and spent a good deal of my morning on conference calls. I could barely get anything done because I was on the phone so much. I managed to grab a breakfast sandwich from Food for Life but that was about it. I had to skip lunch because there just wasn’t any time.

My day stayed completely busy and I wasn’t even able to do any of my regular cleaning around the apartment like I like to do when I am home for the day. I just made myself one cup of coffee after another and sat in the office – mostly on the phone. I did manage to keep Dominica’s laptop humming along doing h.264 conversions for the AppleTV. I got a lot of content compressed so that we can use it more effectively. I did manage to schedule a light bulb replacement with maintenance. Not much of an accomplishment for the day but at least it is something.

So dad discovered this caricature drawn of me in 1987 (yes, I was eleven years old and my family had just gotten their Commodore Amiga 1000 computer) in the arcade in the basement of the Contemporary Resort in Walt Disney World where we went on vacation that year.  I remember that the arcade was a really big deal at the time being one of the largest in the world which was a pretty funny thing to have in Disney World where there was so much else to do.  It wasn’t very heavily utilized and had a silly little snack bar.

My favourite game in the arcade, which we went to several evenings after returning from the parks, was a very early three dimensional space ship game.  It was one of those really large arcade games that was shaped like a cockpit and you actually climbed into it and sat in the dark to play, and you had a huge joystick with all of the firing controls built in.  Commonplace stuff today but quite rare back in 1987.  I am pretty sure that the background of the game was provided through video and that only the ship that you watched itself and the enemy ships were generated by the computer.  It was very simple but so much better than anything that I had ever played before.  Far better than SkyFox on the Amiga.

Dominica came home and did some grocery shopping today but forgot about the groceries until we started talking about dinner plans. But there was nothing in the groceries that would spoil so we decided to just leave the car in the garage for the evening and to deal with the groceries tomorrow. So for dinner we ordered in Chinese from Golden City and watched one episode of the fourth season of Allo, Allo.

One episode was all that I had time for as I had several pending phone calls that I needed to deal with from earlier in the day.  I spend the entire evening on the phone with Andy and trying to reach Susan who has been attempting but failing to catch me for days.  Then, at around nine thirty, I got caught on a conference call and didn’t get to go to bed until quite late.