I slept until nine thirty this morning and boy did I ever need it. I was so exhausted yesterday. Today Dominica and I are going to attempt to just relax as much as possible. 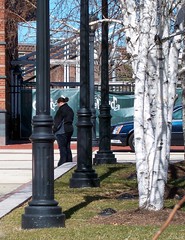 We did breakfast over at Airlie Cafe and Dominica got introduced to their awesome salads. She didn’t want one when she first sent me over for food but changed her mind after trying a bite of mine. So after a while she sent me back over, in the pouring rain, to get her a salad as well.

The weather was crazy today. The rain began last night and went steadily all evening and all night. This morning it got much heavier but came in a strange cycle of light to incredibly heavy that lasted for the entire day. The entire area was flooded. Oreo’s little bit of mulch and groundcover where he likes to do his business was completely under water, and the streets were just flowing with the water that couldn’t make it into the storm drains.

Dominica and I decided to play some Munchkin Cthulhu that Dominica had picked up at Barnes & Noble last week. It isn’t much fun with just the two of us but we gave it a try. We played two games of that and then played some Settlers of Catan (a.k.a. Die Siedler von Catan) which Min is now addicted to.

I did some web design and touch-up work today. This has been a week of doing straight-HTML to PHP-managed-HTML conversions. The sooner you do it the less work it is in the long run.
I had to work a bit this evening. I was scheduled to start at four in the afternoon so our day was rather short. I ended up working from four until nine. Not bad compared to how much everyone else at the office had to work today but I was still pretty tired from yesterday. The work was very simple, though, and not stressful at all. Mostly just support work and a little paperwork. Good work for a Saturday.

Around eight or so Dominica switched over to doing her homework for her GPS and the New Geography class which she ended up working on until a little before one in the morning. Oreo and I were very tired so we went ahead and went to bed and I read some in my “The Art of Project Management” book and then listened to the first disc of “More News from Lake Wobegon” by Garrison Keillor which is from 1989, I believe. The first disc has by far some of the most famous skits on it including “Pontoon” which has become possibly the best known of Garrison’s “News from Lake Wobegon” skits over the past year or two as it has been released on several collections and incorporated into his latest novel “Pontoon”.

Dominica has a lot more homework to do tomorrow. I have nothing scheduled except for some web design consulting for Previsor/Brainbench. I will be doing some relaxing tomorrow. Maybe getting caught up on some house chores.