Today Dominica and my first nephew, Garrett Grice, was born!  We haven’t heard a lot of details yet but as far as we know everyone is doing well.  We have already seen a picture of him and he looks to be very healthy and happy. 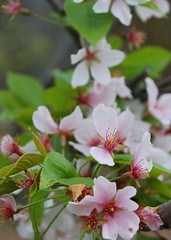 It is dreary and drizzly in New Jersey today.

My big surprise came this morning when I was contacted by a marketing firm representing Prudential.  They had discovered some of my Newark Branch Brook Park Cherry Blossom pictures on Flickr and wanted to purchase several of them for Prudential.  Prudential is interested in using them to make gifts for Japanese clientele.  It is very cool to have my pictures noticed!

After Dominica got home this evening, she made us dinner which was Frito pie.  Frito pie is like Fritos and vegetarian chili.  It is really good.  We are very excited that Dominica discovered new low-sodium Fritos which are much better than regular “super salty” Fritos.

After we ate we spent forty or fifty minutes playing Mario Kart on the Wii.  This was Min’s first time playing the new game.  Francesca was using being in labor all day today as an excuse to not run out and pick up her own copy so that she can race against us.  She will be sorry when we have mastered all of the courses!

We tried playing a bit online again but quickly realized that we really aren’t ready to face the online players until we have played through all of the maps and learned them pretty well.  You can’t go into the online play blindly or you are going to get destroyed.  A lot of the online maps are very difficult and if you don’t know what to expect you are at a pretty significant disadvantage.  A lot of those maps are based on you having memorized them to be able to get through them at all.

Today is my first day writing the site using WordPress 2.5.1 which is just awesome.  The admin interface is so much smoother and easier to use than the old one.  It really makes my job easier.  And the site really does appear to load quite a bit faster too which is nice.  I am really happy about the new “widgets” function that allows me to turn on cool functionality like the “tag cloud” that you can now see on the left.  That makes it much easier to track down topics.

Tonight was a fairly relaxing night.   I did a little web work and did a little homework reading and spent a bit of time managing a troublesome bit of Handbraking.  Obviously the SGL changes were a bit of an evening project as well.  I woke Dominica up at half till midnight so that she could come out to the living room and see the first picture of Garrett that had been sent through.  She had spent the evening text messaging her sister and everyone in Houston.

I will be on Wall Street tomorrow.  Hopefully it won’t be raining on my as I walk.