Spring is really here as of today. The sun is out and it is very bright. It is so warm outside in Newark that you don’t need even the lightest jacket to be outside. 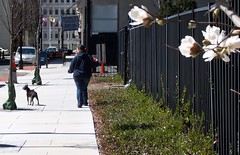 We all slept in a bit this morning. The past two weeks have been really exhausting and I wanted to get caught up before spending a lot of time trying to get homework and other stuff out of the way. I have homework due tomorrow night and more due in the middle of the week. But I don’t know how much time that I will have to spend on that later in the week so my plan is to do it all this weekend. Plus I have around one hundred servers that need patching at the office this weekend and I am planning on doing that this evening after a long Handbrake compression job that has been running for forty-eight hours on my main Windows desktop wraps up. Min has quite a bit of homework, both current and backlogged, that she is planning on doing this weekend as well.

We decided that we were really getting burned out and that we really needed to take a little time and just relax. So we spent a great deal of the day laying in bed watching the eighth season of That 70s Show. Nineteen episodes, in fact. Which is a bit much. But when you figure that they are just twenty-two minutes per episode and that we cut off the end credits and that we are able to go from show to show dramatically faster even than if we were watching them on DVD, it comes out to six hours and twenty minutes of viewing, which is still ridiculous, but manageable. I wonder what percentage of Americans watch over six hours of random television – mostly commercials or time skipping from one show to another – every Saturday. At least our viewing was pure content and all pre-selected and material that we have been waiting for years to see.

The sun was out part of the day and Oreo migrated back and forth between the living room and the bedroom. He is having a very good day full of sleep, sunlight and snuggles. It doesn’t get much better when you are a lazy, seven year old Boston Terrier.

We got breakfast from Airlie Cafe and a late lunch or early dinner from Food for Life. It was a very simple day.

By evening time I had work that just had to be done and could not be put off any longer. So I brought my laptop into the bedroom and did system patching for three hours while we were watching “television”. So half of my day of watching That 70s Show was mixed with work at the same time.

There was quite a bit of work to do and I didn’t actually get to go to bed until after one in the morning.