Today I have a Hewlett-Packard “show” in Tribeca at lunchtime running all afternoon so I decided, rather than going to downtown and then having to cross town to the show that I would just work from home until the show. It saves almost an hour of total travel time as getting to Tribeca is easier than getting to Wall in the first place. It is a good thing that I did that because I ended up having a very busy morning and did not have the time to waste traveling unnecessarily. 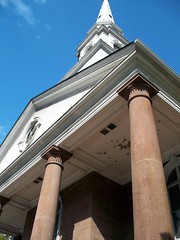 As it was I got stuck working until forty-five minutes after I had wanted to leave for the show so there was no way that I was going to make it on time. Then, right as I arrived at the Tribeca office, I got a call and was on the phone for half an hour or more before I could even go in.

The show was good and valuable. I always enjoy these technology “catch up” events. We got cool stuff at this show too like really nice polo shirts and big flash drives. I’m all into industry swag.

After the show, which went until five, I went down and worked for a little while off of the Tribeca trading floor before heading for home. It ended up being a pretty long day.

I got back home to Newark a little before seven. I decided to skip dinner. Dominica just made herself some pasta. I have a very busy evening planned out so she just watched some Internet TV and went to bed.

I settled in, by seven, to a long evening of working on a Red Hat exam. I ended up putting in an entire eight hours on continuous starring at the screen working on the exam. I didn’t wrap up until three in the morning! Boy was I tired. but I really wanted to get this work out of the way before I switched gears to work on my big Java programming project that I have to turn in in ten days. I am so much more efficient when I am not task switching more than necessary as well as when I don’t have big workloads hanging over my head. It was a long night but I did some really good work, learned a bunch of stuff as well and am feeling very happy having all of that work done and over with.