Dominica and I slept in quite late this morning. We really wore ourselves out yesterday being in the parks for over twelve hours! Today we are taking it easy and just relaxing at the Wilderness Lodge. Officially checkout is at eleven but I called down and they are letting us stay until one in the afternoon which is awesome as our Magical Express pickup time is at four giving us just three hours between checkout and pickup and we expect to do dinner during that time. 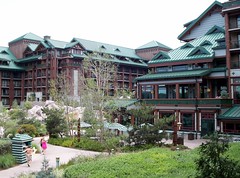 We ordered in breakfast room service at a quarter till eleven. We got a nice big breakfast with eggs and toast and waffles and a continental bread basket and tea. We sat out on the balcony and ate as the weather wasn’t so muggy today. While we were eating the newlyweds that we met on Sunday evening walked by on the path under our balcony so we got to say hi to them again.

We spent the middle of the day just relaxing on the balcony and drinking tea after we had the room all packed. We checked out at one and gave our luggage to the valet services to keep for us until it was time to leave. They take care of everything for you when you use the Magical Express. You can just leave your luggage in your room and have bell services take it to the valet who have storage for it and will then load it on to your bus going to the airport for you so that you never have to do anything with it at all. Very handy.

We did some shopping for a while and spent a bit of time relaxing on the porch of the lodge where the Silver Creek runs out of the lobby and down towards the waterfall. There were several ducks playing in the creek which was very cute and relaxing to watch.

For dinner we decided to try out the Whispering Canyon Cafe which some people had told us was really good. It is right in the lobby of the Wilderness Lodge so it could not have been any handier for us. It is a full service restaurant but much more family oriented and not fancy like Artist Point.

Lunch was great. Dominica got an enchilada made with quinoa and I got whiskey maple glazed trout. The really cool piece of the meal was the bottomless milkshake that, on this particular day, was available in vanilla, chocolate, strawberry, bubblegum or cotton candy! I, of course, got it in bubblegum which was awesome. The food was really good and, once again, no room for appetizers or dessert. The price was good too. We had several full, sit down meals where we were surprised by how inexpensive it is. 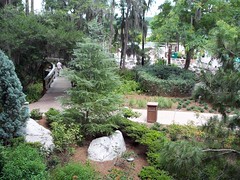 One thing that we definitely learned on this trip is that the Disney Dining Plan doesn’t make any sense for us. We eat fewer meals per day and more “fancy” meals (all sit down – no counter service) than the plans really account for and we don’t tend to use the drinks and often not the appetizers that come with them but often get other things, like the milkshake, that are not included. Had we done this trip on the dining plan we would have paid between slightly more and almost double for each and every meal that we ate, and from watching other people use the dining plan it seems to be a bit more hassle than just charging the room. So our way gives us better flexibility and saves us money. No upside to the dining plan that we could find.

The bus took us at four over to the airport. We were there with about two hours to kill before boarding time. I did some reading in my book while we were waiting to get on the flight. We were just early enough that Continental offered to bump us to an earlier flight but because we had checked one bag we were not able to do so. So we were stuck when we could have been home around six in the evening. We might have even been able to get Oreo if things had gone really well.

The flight went well and because the trip home was longer than the trip heading south they had a movie available for us to watch so we got to see The Spiderwick Chronicles which was pretty cool as it was a movie that we had wanted to see anyway. It was extra cool as the DVD is scheduled to release until June 24th. It was a pretty good movie too and really helped pass the time. Also helping to pass the time was the loads of free ginger ale and Scotch that they kept giving us on the half-empty flight. Dominica and I had a three seat row to ourselves and all that we could drink. They even gave me a couple Scotches to take home with me as they didn’t need anymore. We were very happy with our flight!

It was pretty late when we got home. We took a taxi back to Eleven80, picked up our packages that had arrived while we were gone and headed for bed. While we were gone the rosebush got spider mites and was dead. It had been in pretty rough shape before so that was no surprise. The mandarin and the tree by my desk seem to be doing well and the ivy seems to be okay. Neither palm seems too happy although the one near my desk is probably okay. The one by the loveseat has spider mites now too and is all but dead.