It was around one in the morning when Dominica and I pulled into Frankfort.  We got to sleep as quickly as we could but it was still a pretty late night.  We were really exhausted by the time that we arrived.  I was starting to have problems driving because it had been such a long day (and week.) 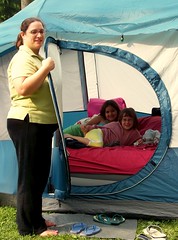 We slept in a bit this morning in the hopes of being rested for our trip.  But we were awake far earlier than we had hoped and only had a moderately long night.  Not enough to catch up on anything – just enough to hold our ground.

Getting the car packed was a major ordeal.  Fortunately Dominica’s father did the bulk of the packing.  We are borrowing her parents’ Chrysler 300M with their Thule roof top carrier to fit all of the camping supplies.  It is an incredible amount of stuff.  Far more than I had thought that we were going to be taking for two nights of camping.

We didn’t think that we needed to be in a hurry today so we took our time and relaxed a bit.  It was around one, I think, when we left Frankfort.  A normal trip from Frankfort to Watkins Glen takes less than three hours so we were expecting to arrived before six.  That seemed like it would be plenty of time.

We ended up getting stuck in completely stopped traffic on interstate 81 south of Syracuse.  Traffic was really awful and we sat there for an extremely long time without really moving.  All movement appeared to be coming from traffic compressing and not from people getting through.  Dominica, being pregnant, really needed to get to a restroom and this was causing a bit of a panic.

We decided that jumping off of 81 a the first available exit was the only move that made any sense.  So we exited at Preble and went south on 281 towards Cortland.  Unfortunately, this didn’t work out any better.  After about two miles we ended up in an “as far as the eye can see” line of cars that were not really moving either.  We sat there for a very long time before getting a chance to take a random side road.

We ate at the first restaurant that we were able to find, which ended up being a pizza place in Homer.  Finally Dominica was able to use a restroom.  It was a completely emergency at this point.  I have never seen traffic stop like this out in the country on two mostly unrelated roads like this before.  It was very strange.

It was so hot today, well into the nineties, that while we ate the car had to be left running with the air conditioning on full blast with blankets in the windows just to keep Oreo cool enough.  We had to sit so that we could watch the car all through lunch.  At least we had a chance to get some food while we were stuck.

While we were eating it suddenly began to downpour.  Oreo’s blanket was keeping the sun off of him and instantly became soaked.  First traffic issues and then our first big rain and something that we needed for the trip getting wet.  We should have guessed that things were going to be rough at this point.  At least we had the A/C running and didn’t have any windows open as we normally would have done or the entire interior of the car would have been drenched.  It was a lot of rain that came down.

By the time that we were done eating, we had lost just short of two hours because of traffic delays!  Our moderately late day had become extremely late.  We hurried on to Watkins Glen making as good of time as possible.  We never did definitely find out what either delay was.  Both were quite strange.

It was around six thirty when we arrived at the KOA in Watkins Glen, if I remember correctly.  It was quite late considering that we needed to set up the camp site after arriving.  We got checked in and drove out to our camp site, E103.  It was one of the last sites left as the campground is, I believe, full tonight.

It took us a while to get the tent set up.  Because we arrived so late we had the “all thats left” campsite that didn’t have any large grassy space on which to put the tent.  We made due with using some rocky space under the porch area and getting as much as we could onto the grass.  I destroyed several of our yellow, plastic Coleman tent stakes trying to secure the tent to rocky ground.  I beat the mallet so hard that it was starting to come apart.

It was incredibly hot and I was just burning up by the time that we finally got the tent errected.  Madeline and Emily were definitely bored out of their minds after the unexpectedly long car ride and then sitting for an hour or so as we tried to put the camp site together.

We were quite obviously extremely novice at camp-setup and our E104 site neighbours stopped by to see if we were going to be alright and offered some assistance in getting the site put together, but we managed, more or less, on our own.  It took a long time and we were really exhausted by the end, but we did it ourselves.

There was a lot of “little things” that needed to be done to get the camp site really ready so Dominica got to work on that with Oreo sleeping in the tent on the air mattresses while I took Madeline and Emily to the indoor pool to go swimming.  Swimming was really the only fun activity for them all day.  It was a lot of travel and work for just an hour or two of swimming.  I didn’t swim but just sat on the side as a lifeguard.  We swam until it was time for the pool to close at nine.

The girls and I stopped at the campground store and got ice cream for ourselves and Dominica and delivered it back to the camp site.  Dominica did a ton of setup work while we were gone and now it was very dark. She cooked us franks and beans for dinner which was very tough as she had all kinds of problems using the camp stove.  She and I settled for just beans as cooking veggie dogs too was deemed to be far too much effort.  We were completely exhausted already.

Dominica washed up the dished and I made an attempt to start a fire but nothing would start.  We weren’t planning on a fire tonight but thought that we would at least try.  It was so hot, though, that having a fire was not ideal.

It was around ten when we all got to bed.  We were exhausted and very hot.  I was covered in sweat from it being so hot all evening.  We were very glad that we had the ceiling and window fans for the tent.  It made all of the difference.

While are day was pretty rough, we were very impressed with the KOA campground (kampground.)  Everything was clean and nice and there are a lot of ammenities.  Quite impressive.  It really is a little like a resort.

The rain started around eleven.  We knew that rain was expected tomorrow but were not expecting to get any tonight.  This is not what we had wanted.

Dominica and I both got up and quickly “battened down the hatches” to seal up the tent.  We did okay for the first while but it rained all night getting pretty heavy in the middle of the night.  Eventually we started getting leaks and water starting collecting.  We had to deal with that a bit during the night.  The beds stayed dry mostly but the floor was a mess.  Lots to deal with tomorrow 🙁

We had been really hopeful that we would at least have no rain tonight.  Now our whole weekend is going to be driven by the rain.