Thankfully it did not rain last night or if it did it was extremely little.  We actually got pretty decent sleep once we were all able to fall asleep.  We didn’t get up until after eight. 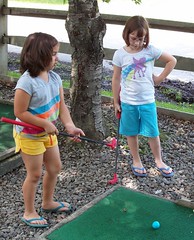 We were delighted to discover that the sun was out and that the dew was rapidly burning off of the grass.  This was a Godsend as we desperately needed to lay out just about everything that we had brought with us in order to dry it out before we could pack it to go back with us.  If we didn’t get everything dry this morning then we had to unpack everything at Dominica’s parents’ house, set the tent and everything back up, let it dry and then have her family pack it back up when it was all done.  That would have taken hours out of our afternoon which we did not have any of which to spare.

There wasn’t really any time to spare this morning and we spent every moment that we had available to us drying and packing the camping gear.  We let Madeline and Emily sleep as long as they could but for Emily that wasn’t long at all and for Madeline it was only until around nine.  The girls really had nothing to do this morning and we very, very bored.  We felt really bad but there was nothing that we could do to entertain them as we had to spend all of our time getting the camp packed.  They did spend a little time taking turns playing Cooking Mama on Dominica’s Nintendo DS, but that only killed so much time.

Somehow the car-top carrier actually got dry and we were able to pack everything into the car.  It was amazing that Dominica was able to figure out how to get everything back into the car.  I could never have packed the car like that.  Not having Oreo with us did make things quite a bit easier as we were able to use the space in the back seat that he had been using on the way down.

It was a quarter till one when we were finally able to check out and pull out of the campground.  Almost five hours of packing!  But we can’t complain as everything was dry (except for the towels) and everything was put away and packed into the car.  What a relief it was to have that all done.

After checking out we played a round of miniature golf for the girls as they had been so patient all morning with nothing to do.  Dominica was only able to play a couple of holes, though, as she started getting light headed from bending over so much trying to play so she had to stop.  Being pregnant is tough.

After the girls finished their game we drove on down to the town of Watkins Glen and stopped a the Burger King there to get a quick lunch.  We got to try out their new apple fries which are apples cut into the shape of french fries that come with a caramel sauce for dipping.  It is a great idea.  Far healthier than French fries and quite tasty.  I never liked Burger King’s French fries anyway so this is a great alternative for me that makes me far more likely to want to eat at Burger King.

After lunch we crossed the parking lot and we all got ice cream (or gellato for Dominica) from the ice cream shop that was located right there.  Then it was time to really get on the road.  So around two in the afternoon we finally set off for Frankfort.

This time the drive went well and we made good time through Ithaca, Cortland and Syracuse and up to Utica and Frankfort.  We arrived in Frankfort just in time for dinner so we hung around for just a little while and had the picnic at the Tocco’s that had originally been planned for yesterday before the rain made that pretty much impossible.

While we were there with the BMW 330Ci parked in the police station / municipal parking lot directly next to Dominica’s parents’ house another completely identical BMW pulled in and parked nose to nose with Dominica’s car.  We have never seen another BMW in Frankfort let alone a completely identical model with the same year, color, model and options and then to have them parked nose to nose on a Monday evening!  I ran out and took some pictures just to prove that it happened and ended up being outside at just the right time to see the other owner and to get to talk to him for a little bit about the car.  He does not live in Frankfort, as you can imagine.

We got the Chrysler 300M unpacked and packed up the BMW and were back on the road between six and seven in the evening.  The drive back down to Newark went well and we arrived at the apartment at Eleven80 before midnight.  We were completely exhausted by the time that we got home but still had to unload the car and walk Oreo.  Then Dominica went straight to bed but I was so wired from driving and walking the dog that I didn’t fall asleep until two in the morning.