The verdict is that we really like camping with our new camping equipment.  We didn’t bring quite as much equipment as we had have having skimped on the sleeping bag and going with nothing but a sheet between us and the cold air mattress but we won’t make that mistake next weekend.  Oreo thought that sleeping outside in the tent was the greatest thing ever.  He had a wonderful time. 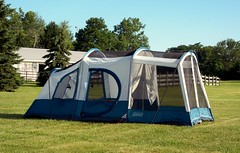 The one thing that we realized is a problem with us camping is that Dominica has to make several trips to the restroom during the night since she is pregnant and being far away from the restroom isn’t very convenient for her.  Oreo also seems to like the proximity of the great outdoors and chooses to go out in the middle of the night causing additional disruption.

We did get very good sleep, however, and were well rested and very happy in the morning.  The tent allowed us so much fresh air – not like any camping that I had ever attempted before.  And for just the two of us (and the dog) the tent is incredibly spacious.  I think that we are very likely to attempt camping on our own in the very near future.  Oreo would definitely enjoy that.  Maybe we will try camping in Maine or Canada although there are lots of state parks that can work as well.

We have most of the gear that we need.  That new electrical stuff, which will be cheap, a power adapter and some organizers for the inside of the tent should do the trick.  We need places to put our stuff that are up off of the floor.  We will be taking “camping chairs” as well to set up in our porch area which we didn’t use at all this time.  Other than that we seemed to be pretty well stocked.  We are not attempting to cook in any way this time so there is a lot of potential problems in that area that we have yet to tackle.

We left the tent set up as we are going to be using it again tonight.  We had wanted to go to the Omega Grill in Geneseo for breakfast this morning but we got up a little too late as I was scheduled to work at ten in the morning.

I worked for several hours taking up the bulk of the middle of the day.  Since we couldn’t go out for breakfast or lunch we ordered pizza from Davis’ Farm Market in Pavilion and dad went down and picked it up.

After lunch the Ralstons came up with Settlers and we played for a while and visited.  They had just a small, mid-afternoon window to see us so we didn’t get to hang out for very long.  Michael went out with his Nintendo DS and played in the screened porch area of the tent.  That is something that we are going to attempt to bring next weekend when we do real camping – our Nintendo DS and Sony PSPs.  That way there is definitley stuff to do while in the tent.  We have games for both systems that we have never even played!

The Ralstons left around four in the afternoon and I worked for another hour or so until we drove up to Geneseo to meet my Aunt Sharon and Uncle Leo at the Shang Hai restaurant for dinner.  Then, after dinner, we came back down to Peoria and drove down to the new construction on NY Route 63. We walked around the new intersection to check out how the work is progressing.  It is really coming along quickly.

We looked at about 500 slides from around 1982 to 1984 that dad had mostly from the construction of his house.  Dominica had never seen pictures of what the farm looked like with the old 1904 farmhouse and the cabana, swimming pool, etc.  It was pretty interesting.  Now she understands what a strange childhood I had.  That old house was really crazy.  Dad and I are trying to figure out how to get all of those old slides converted to digital so that we can get them up on line.  Now that the baby is coming it is more important than ever to get all of that history somewhere before it is too late.

We camped back out in the tent again tonight.  Oreo is used to it already and went right on out and climbed on in.  This is his new favorite place to sleep.  He is really exhausted tonight after spending the day playing on the farm.