When we got home last night the first order of business was to take care of the plants.  They hate when we leave for the weekend as they don’t get their regular water and the apartment gets much warmer than usual.  It becomes a perfect breeding ground for plant pests and it takes it toll on the plants.

This time we did pretty well and no plants died.  The one plant, our really resilient one – the Cycas, actually did amazingly well.  Just last week we suddenly noticed that there was some surprise new vegetation happening with it and it grew around four inches while we were gone this weekend!  The mandarin also seems to be doing pretty well with some new leaves coming in now.

After all of the driving I was not very tired – or at least not ready to go to bed.  So I ended up staying awake until after one thirty listening to ITConversations on my iPod Nano.  Then, when I did finally fall asleep, I ended up waking up around two thirty!  It seemed like I had been asleep for a long time but I had not.

Then, at three thirty in the morning, I was paged out accidentally.  Then I had a horrible time getting back to sleep.  So I was up until around four thirty, I think.  Then, of course, I am working the early morning coverage shift this week for someone so I had to be up and logged in and working by six thirty!  So basically I got no sleep at all.

We decided to have Oreo stay at home today as he is just completely exhausted.  This weekend involved a lot of travel, playing outside and grass allergies and he is just worn out.  He really needed a day to just sleep and do nothing.

My day was relatively busy.  Any time that I work the early shift this happens.  I like the early shift because it forces me to get up and to get to work right away instead of just putzing around but it also causes really long days to occur because people at the office don’t have a big board showing that I am on the early shift on a given day so people just expect me to work as late as I usually do even though I’ve been on since six thirty in the morning. 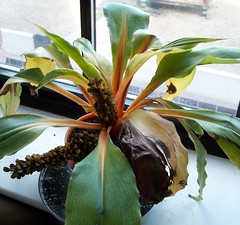 In addition to working today I really had to do some house chores as Ramona and Winni are coming over this evening to play test Dungeons & Dragons Fourth Edition. We will see how much of a game we actually manage to play, but to speed things along Ramona is picking up Food for Life on her way to the apartment.

I did the dishes and got the kitchen cleaned up as well as cleaning around my office area and, of course, I was on plant duty today as the plants always need extra attention after being left alone for three days.

I also completed the Hewlett-Packard Linux 401 class that I have been taking.  It was shorter than the 101, 201 and 301 classes that I have taken in the past.  It may seem strange that I would take a Linux class when I am a senior Linux Sys Admin now and have been for some time but I like to make sure that people are not learning things that I am not familiar with and also I like to see what topics are a priority to students and to companies like HP.  Plus, as this class is free and online on my own schedule, it falls into the category of “how can I justify not taking it?”

I placed a large Amazon order today.  I am doing a bunch of Business Analyst work for a certification process and I need a ton of the top source material in the BA realm so I am ordering a good chunk of the definitive reading list all at once.  Several of the books were books that I had previously wanted to buy anyway so it isn’t all “expense” in the traditional sense but it is several books.  I also got a book on foreign currency trading so that I can learn more about what I support at the office.

Books ordered today: Writing Effective Use Cases by Alistair Cockburn, Software Requirements 2nd Ed., UML for the IT Business Analyst: A Practical Guide to Object-Oriented Requirements Gathering and More Joel on Software: Further Thoughts on Diverse and Occasionally Related Matters That Will Prove of Interest to Software Developers, Designers, and … Luck, Work with Them in Some Capacity by Joel Spolsky.

Dominica did some grocery shopping today on her lunch break.  She got home around six.  Winni arrived around six thirty and Ramona made it around seven.  We didn’t actually end up with any time to play any D&D.  The evenings are just so short.

We ordered in pizza from Eli’s.  That ended up taking over an hour.  So it was closing in on nine o’clock by the time that we had finished dinner and then it was not that far from bed time.  It is amazing how difficult it is to do anything on a “work night”.

Winni and Ramona left around ten thirty and Dominica and Oreo headed off to bed.  I did a little wrap up work to make sure that things were hunky-dorie at the office before going to bed myself.  There is always something that needs to be dealt with.