The long day continues.  The in-place Windows Server 2003 Web Edition installation on the Compaq Proliant DL360 G2 continued until one forty in the morning.

It was just a little after one thirty when it occurred to me that a lot of the work that I was doing here in the apartment in Newark could be done remotely.  I have become accustomed to the equipment in Scranton not having the benefit of remote optical media but this server does (it has a full ILO rather than the older RILOE card that we had to add to the earlier generation servers.)  And since the installation media that I am using was generated from an ISO image already – we could have just used that remotely to do everything that we are doing right now.  It is not like I am doing anything with a local keyboard, mouse or monitor – even sitting right next to the server I am doing everything through the ILO!  Argh.

I hate it when I get so tired and so close to a problem that I can no longer think of the obvious.  Like yesterday at the data center – I had Andy do a ton of “remote hands” work on a server that I was standing directly in front of because I had no means to access it.  But I had forgotten about the laptop that was right out in the car!  Argh, again.

This was my first even in-place Windows Server 2003 installation.  I never did that on Windows 2000 Server either.  I have not done it, unless I am forgetting something, since my Windows NT 4 days!

It was truly amazing to see the Windows 2003 splash screen come up finally on the remote console of the server.  What a day, what a day.  Still a lot more work left to be done.  But at least that bit is done.  The first huddle has been cleared.

Around two in the morning I had the “new” machine online.  I ran in to tell Dominica (who was very fast asleep as was Oreo) that it was working and that I would shortly be out the door for Scranton.  The valets, knowing that I might need to run out at any minute, had the BMW ready for me on the side of the building.  So I emailed the datacenter to let them know about when I would arrive and I was out the door with my server (DL360 G2), rails, two cans of Monster Juiced energy drinks, my BlackBerry, GPS and my iPod.

Dominica woke up when I was leaving so she helped me get ready to head out the door.  We discussed the issue of me making it back in time for her to leave for work.  It was going to be close.  It is roughly two hours, each direction, to and from Scranton from Newark.  Since it was already a quarter after two, that meant that best case scenario was that I would be back at roughly a quarter after six.  She has to leave for work at seven.  That is a pretty tight window considering that I had to cover two hundred and twenty miles, a good portion of which would be done during early rush hour, as well as get gas and stop at the datacenter, rack and test the server!

I made great time driving out to Scranton.  It was just after four when I arrived.  There was no traffic whatsoever and the construction zones didn’t affect me in the least.  The drive was very nice, all things considered.

Once at the datacenter I got straight in and first did a quick memory swap so that the new server would have more memory than the machine that it was replacing rather than less.  Then into the rack it went.  The racking went very smoothly indeed.  No issues at all.  Since I was pulling two other servers out of the rack there were plenty of cables available for me to use.

The server fired right up without any problems at all.  I plugged in a KVM cable just so that I could verify that the machine had come up on the monitor that they had there in the row.  Once I saw the Windows Server 2003 splash screen come up I knew that it was time to go.

I pulled two servers (HP DL360 G1) from the rack and loaded them into the trunk and headed back for home.  I ran across the street to the Turkey Hill gas station and topped up the tank so that neither I nor Dominica would have to worry about it today.  I text messaged Dominica from the gas station so that she would know that the car would be available for her to go to work and then I was off for the trip home.

The drive back didn’t go quite as quickly as the drive westward but it was not bad.  I hit heavy traffic around Tannersville, Pennsylvania and ended up driving all of the way from there to Newark, New Jersey is light, early morning Manhattan rush hour traffic.

I arrived at Eleven80 at six twenty in the morning.  Boy was I ever tired.  Dominica was not quite up yet when I came in the door.  She had been hoping, I think, that I would not make it back in time and that she would be stuck calling in to work, but I was back with plenty of time to spare so she was able to get to work.

I did some wrap up and verification work while she was getting ready.  I ran a little late, but only a little, to the office today.  The walk to the train and from the WTC to the end of Wall Street were good for me as they helped to keep me awake.

My morning was not too busy.  The United Kingdom and the Kingdom of Bahrain both have a holdiay so the people who generally produce the most work for me are all out today.

For lunch, which is my first proper meal since eating dinner at the Franklin Hotel in Rome on Saturday evening, Katie and I decided to hit the Waterstone Grill between Pearl and Stone.  We are always on the prowl for new “foodie” places to eat and especially ones with outdoor seating.  It is supposed to rain this afternoon and I am looking to sit out in the rain and enjoy some serious seafood.

Lunch was truly amazing.  This was the best meal, in my opinion, that Katie and I have discovered yet and I definitely beat her in picking the best menu item today.  I went for the pan crispy striped bass which was truly amazing.  Glorious, in fact.  Just what I needed.  Katie had the lemongrass encrusted Chilean sea bass which was also good but not truly comparable to the pan crispy striped bass.  I can’t recommend it enough.

I also had a lobster and onion tart as well as a bowl of lobster bisque with a shot of sherry.  Keep in mind that this was my first real meal since Saturday night!  All of the food was really excellent. 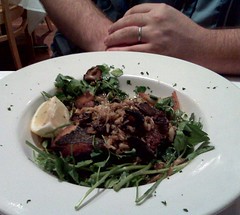 The afternoon was not as busy, which was very good because by the time that I had food I was getting incredily sleepy.  I kind of just drifted along through the afternoon until five thirty when I headed for Newark.

I arrived at Eleven80 and Ramona, who was meeting us for dinner, we though, around seven, was already there and waiting for me in the lobby.  Dominica had run into traffic because of an accident on NJ21 and was running late.

We just ordered in dinner from Ninos’ since it was Monday and places like 27Mix were likely to be closed.  We ate and I had to head off to bed around nine o’clock.  I just could stay up and visit any longer.  Oreo was very excited to be able to come to bed early with me and was very snuggly.  I have no idea how long Dominica and Ramona stayed up visiting.