Today was, by necessity, my recovery day.  The weekend was so long and arduous that I will be recovering for the next few days at least.

This morning I was able to sleep in until around seven which mean that I slept for a good ten hours.  I feel so much better.

I worked from home for quite a bit this morning.  There was much to be done and this was my chance to catch up with much of it. 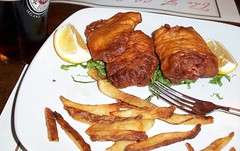 I didn’t end up going into the office until lunchtime.  And it was a late lunch at that.  I met Katie at The Full Shilling, 160 Pearl, for some pub grub for lunch.  She had the grilled shrimp salad and I had fish and chips with malt vinegar but no marrowfat peas.

Then into the office for the afternoon.  I worked until just after five when I found out that there was an 30th Anniversary party for a friend in Tribeca.  So I ran out the door with some friends and we caught a cap to Tribeca.

The party didn’t really get started until almost seven which was a bit later than we had expected.  It was scheduled to start at a quarter after six but because of traffic issues a number of people, including the person for whom the party was being thrown, could not make it until a little bit later.

I had a good time hanging out with a huge band of my coworkers for about two and a half hours, until nine thirty, when I decided to forego dinner out with the crew and bring dinner home for Dominica instead.  My mobile phone had run out of juice so I was unable to call, text, email or Twitter her to let her know my current status.

I got to Newark around a quarter after ten.  Getting to New Jersey late in the evening from Manhattan becomes quite a pain.  You can lose a lot of time just waiting for the train.

I picked up dinner from McDonald’s in the train station in Newark and walked home.  Dominica had already eaten a light dinner but ate some of what I brought home as well.

We watched the pilot episode of The Love Boat aka The New Love Boat and then it was time for bed.  I was pretty tired before going out this evening so by the time that we went to bed I was really exhausted.  There has just been no sleep this week!  I have to be up early tomorrow morning as I am working in Warren and need to catch the train.

Today I finally gave in to the constant pressure that says that I need to have a bag (i.e. a murse) with which to carry all of my stuff to and from the office.  I carry a lot of stuff every day and every day I have to compromise on what I will bring with me.  I would really like it if I could always have a camera (my little Kodak 12MP) and a book along with my other usual items but everything that I carry either has to be in my hand or in my pockets.  As it is I have to carry house keys, my own BlackBerry, my work BlackBerry, my SafeWord card (security device that allows me to log into my office computers) and my iPod Nano.  Those are some pretty full pockets.  And, of course, there is my wallet.  It gets to be a might uncomfortable to have all of those things in my pockets – especially considering the amount of walking that I do.