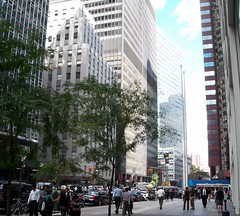 One month until we close on the new house! We are in the home stretch now. Just six more weeks of life in Newark.

I got pretty much no sleep last night.  Oreo needed me to walk him pretty late in the evening which, or course, got my heart rate up and I was not able to fall asleep until after midnight.  Then Oreo got me up a few times during the night and I was finally unable to fall asleep again after three in the morning.  So I got, at most, a total of two or two and a half hours of sleep, and that after having had a very long and trying weekend already.

I left the apartment around six to head into the office. I got outside and discovered that it was far warmer and more humid that I would have guessed.  It was quite uncomfortable on my walk to the office.  I was not expecting it to be hot after having had a nice week.

After having used Twitter now seriously for several weeks I have decided that I am really into the whole microblogging thing but am having reservations about continuing to use Twitter.  Twitter is a closed microblogging service which does not archive my posts indefinitely.  This is fine for day to day use.  My usage pattern is a bit different and with the new house and the baby coming so soon I would really like to be in a position where my posts are going to be archived along with the SGL blog.  I would also like to have my microblog accessible from my office which, like many social networking sites, Twitter is not.

Because of this need I am investigating the first major open-source microblogging platform: Laconica.  Laconica is the platform that powers the popular Twitter competitor Identi.ca.  By using Laconica I will have my posts being stored in my own database, just as I do with SGL, so that they will always be available.  I think that having this legacy data will be a valuable addition to the information already being stored by SGL.  Just in the last several weeks I have had well over four hundred and fifty posts to Twitter.  That represents a lot of information to have lost someday.

Another advantage to Laconica is that my readers will have the option of using SGL as their microblogging platform instead of Twitter.  Sites using Laconica can federate together making a large microblogging community rather than a single, monolithic site like Twitter.  That means that users on Identi.ca, for example, can subscribe to feeds transparently from SGL should we get Laconica running and vice versa.  I am excited and very hopeful that this will work on our web server.

I really like how Friday’s “day of pictures” turned out.  I am going to make an attempt to do something similar today.  I have to go home to Newark during my lunch break so that I can be with Oreo.  Because I left early this morning he has been alone since Dominica went to work around seven.  If I did not go home early today he would be alone for a very, very long time and he would be quite upset.  This week is going to be hard enough on him as it is.

My morning was pretty busy.  Not horrible like you may have expected but definitely busy.  Fewer total tasks to do with but all of the market volatility there was a lot more communication demanded for every little thing.

At twelve thirty I had to take my lunch break as an opportunity to run back to Newark to check on Oreo.  Dominica walked him at seven just before she left and I got to the apartment around one thirty.  He was doing fine and perfectly happy.  Definitely not the same dog that we had two years ago.  He would never have been able to have handled having been left alone for so long.  This week is going to push him to his limit.  We will see how he holds up.

On my walk home I made a point of keeping my Kodak digicam in hand and snapping several pictures so that I could show you, my readers, what my walk is like from the office to home.  Most everyone who reads SGL has never been to the area around where I work or live and I think that people have a difficult time visualizing what much of my day is like.  In fact, Dominica has never been down to where I work and doesn’t even know quite where it is.

I got lunch from Airlie but was so busy that I had to take at least two calls while eating my salad plus answering emails.  They tried to set up by new BlackBerry Curve today as well but were unable to get it to work.  I am hopeful that we can do some troubleshooting tomorrow and get it working.  I have been without BlackBerry access to the office for weeks and it is really annoying.

People often complain about how people with BlackBerrys always work and how the BB is responsible for people never have free time anymore.  This is completely untrue.  It is the BlackBerry that allows me to ever me untethered from my computer.  Because my BlackBerry has been broken I have been forced to stay logged in to the office all hours and to physically go out to the living room office and sit down and go through my mail!  Previously I just checked my BlackBerry from time to time while spending time with Dominica.  This has tripled the workload necessary just to maintain basic communications and does not address issues like this Saturday when we were away from the apartment.

On her way home from work, Dominica stopped off at On the Border and grabbed me fish tacos for dinner.  It worked out well since I was already home with Oreo and she was in no hurry to get back to him like she will be the next few days.  I will not be going in to Warren this week because we will have no way to take care of Oreo during such a long day if I do that.

We put on Frasier and ate our dinners.  We watched several episodes with me taking intermittent breaks to come out and check my mail and to make sure that I was not needed.  This whole week is going to be very busy.

Today was a wild ride for the world financial markets.  Lehman Brothers filed for Chapter 11 Bankruptcy Protection this morning and Merrill-Lynch was acquired by Bank of America and American International Group announced that it was having difficulties and would need assistance.  The scale of this disaster is so big that it really cannot be overstated.  The major banks worked all weekend and today we saw one of the biggest market declines in memory.  Really something to watch.  Over the next week or two we will get a fair idea of just what the long term impact of these events will be.  This is a very important day in financial history.

Today I got to install WordPress with Google Gear integration.  This is the hot, new feature of the latest WordPress platform version.  This should be very cool.  It means that I can keep editing SGL even when the site goes down and that the effort that I put in to editing the site has a smaller impact on site performance.  I am also very excited about WordPress’ built in Word Count functionality that tells me how much I have written right on the screen while I am writing.

Speaking of outages – SGL, along with my email, IM and everything else, was down for an hour or so today.  The outage was not caused by us but by router configuration problems at the datacenter.  I wonder if causing the outage myself wouldn’t make me feel better than having it caused by someone else who doesn’t take responsibility for it.  Hmmm….

I worked until around midnight before heading off to bed.  Tomorrow will be another long day.  I have a long laundry list of things that need to be done over the next few days.