I was awoken this morning by my father yelling that there was someone on the phone who needed me whom he was unable to comprehend.  I had thought that my work this morning was scheduled to commence at eleven but it was actually at ten and I needed to get up and get to work.  You can see how I confused the time as the correct time was 10 on 10/11 but I thought that it was 11 on 10/11 which is exacerbated by the fact that one of the scheduled had it as 10 on 11/11. 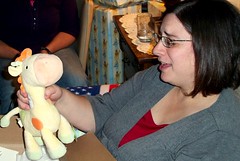 I ended up only needing to work for about an hour right at that point.  That meant that dad and Dominica hadn’t quite left for Geneseo to get lunch yet and I was able to go along with them to the Omega Grill.  So we went to Geneseo at lunch time and after we ate went to Lakeville to the Benjamin Moore paint store so that Dominica could get paint chips so that she can do some decision making for the new house.

The plan is that dad and my aunt Sharon are going to be painting the upper floor of the new house in Peekskill over the first week that we own the house while Dominica and I are still living in Newark.  Dominica’s plan is to have aunt Sharon go over the colours with her to help her make a decision on the scheme.

We spent the afternoon just relaxing at dad’s house.  It was around two when we got back from our trip to Geneseo and we went down to the Richardson’s at five for the family baby shower.

The Ralstons went to the baby shower along with my Upstate New York family: dad, Sharon & Leo, Sara, Jeremy & Rachael and Jim & Shirley.  We had snacks and then Dominica opened presents while I took pictures.  I will be doing that a lot from now on, I expect.  Looking on and taking pictures.  It’s part of being the dad.  (With this round of pictures, we now have over 3,000 posted on Flickr – and I have hundreds of old pics yet to post from my archives and the bulk of our wedding pictures have not yet been digitized!)

We got a lot of really great stuff that we really need quite soon.  Now it really feels like there is a pending baby coming any day!  We have really shifted into “baby coming soon!” mode at this point.

We had dinner and hung out with the family and the Ralstons until pretty late – a little after ten.  We have been staying up way later than we should all weekend.  We drove back to dad’s house and dad and Dominica went to bed.

I drove up to Tim Horton’s on Jefferson Road near Marketplace and met Andy for coffee at eleven thirty.  We ended up hanging out there until about four in the morning.  It was about five when I finally got to bed!

On my drive this evening I finished reading “Getting Stoned with Savages” and started reading “Lost on Planet China” both by J. Maarten Troost.