As you can imagine I was pretty tired this morning when I got paged from the office!  I was not expecting there to be any work going on this morning and so I only had about four hours of sleep at best when dad woke me up to let me know that people were calling looking for me from the office.  So much for sleeping in. 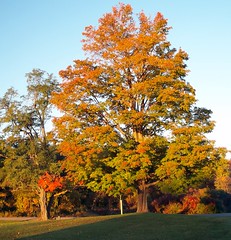 I didn’t have to actually work for very long this morning.  Only about an hour.

After my work was done, we got ready and then drove over to Geneseo to go to the Omega for our last meal in Upstate New York for a while.  This weekend was our last real trip until… well who knows when.  If it wasn’t for the wedding on Friday we wouldn’t have considered traveling this weekend either.

There was much to be done at dad’s after we returned from lunch.  I spent some time working on my class work for my graduate class at RIT and did the base operating system install on the HP Proliant DL385 G5 that has been sitting in dad’s basement.  CentOS 5.2 with Xen.

Dad and Dominica worked on some serious packing projects as we are taking a number of items back with us to Newark that will be moved by the movers in a few weeks to the new house in Peekskill.  Today is also the day in which we winterize the BMW and take the Mazda PR5 out of storage and put it back to good use.  I will never, I think, get over how strange it feels to own a car that you routinely do not sit in for six months and then suddenly drive it out of the barn and drive away with it.  And compared to that, owning the RX7 that hasn’t been driven regularly in five or six years is truly bizarre.  I am used to people owning shells of cars but actual, working, ready-to-go cars in storage is strange.

It ended up being about six in the evening when we finally pulled out of dad’s Peoria estate and hit the long road back to Newark.  We found it strange to think about this round trip home being the first time that we had the opportunity to drive on the newly completed Interstate 99 corridor that we have spent years watching be constructed.  Finished just in time for us to move and have little ongoing need for that route.  After this trip we will be getting very, very used to the entire length of Interstate 86 once again.

The trip south went very well.  We stopped in Mansfield, Pennsylvania and fueled the car (the PR5 has a smaller tank and uses lower grade fuel than the BMW and prices have come down so much!)  A fill up on the BMW has been about $55 and a complete fuel up on the PR5 tonight was just $34!

We stopped at McDonald’s in Mansfield to have a quick bite and were back on the road, after getting confused about how to re-enter the highway, in about an hour.  I listened to my book, “Lost on Planet China”, on my iPod for a bit of the trip while Dominica took a nap.

It was eleven thirty when we arrived in Newark and, hopefully for the last time, loaded up the luggage cart and took a haul of stuff from our car up to the apartment.  After this, all loads should be exiting the building, not entering it.

Oreo has been extremely itchy all week and this weekend it seemed to be getting quite a bit worse.  I took Oreo for a walk after we arrived and we almost couldn’t continue walking because he constantly had to stop to scratch his face.  It is very sad and he is definitely note feeling very well.  We looked at his muzzle closely after we got back to the apartment and he has scratched himself raw and is starting to bleed!  We are going to evaluate him in the morning and see what his condition is then and figure out what needs to be done.

I checked my computer that was loaded up with Handbrake jobs to run while we were gone.  I did such a good job of keeping it busy that the load that I started on Thursday afternoon was still running and was not likely to complete until almost morning!  That was a lot of work out of the way that I would have just been sitting around waiting for otherwise.  I am very glad that I made the decision to run it for the three plus days that we were gone.

Tomorrow I have to go into the office even though it is Columbus Day.  Normally I would have Columbus Day off but I am covering for people tomorrow and will be off on the twenty-second instead so that I can go to the closing for the house without having to take a day off from work.  It really could not have worked out any better timing-wise.

Tomorrow is also the day that Dan and I will be heading down to the tip of Whitehall to try out our local New York Health and Racquet Club which has a pool.  My intention is to go swimming during my lunch break and to see how I like it.  I would really like to get into a serious exercise regimen and it is such a hard thing to do.  Being able to go over lunch in the middle of the day is the perfect solution.  It should, in theory, actually save me money by keeping me from being able to go out to eat anywhere expensive on the days that I go to the gym.  That, in addition to the discount that I get from the office making the membership just $75 per month with a six month commitment, seems like a pretty good deal.